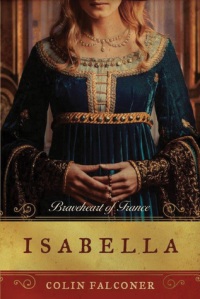 Isabella is only twelve years old when she comes to England as the wife of King Edward II. As the daughter of Philip IV of France, Isabella is no stranger to life at court and with her father’s parting words still fresh in her mind (“You will love this man. Do you understand? You will love him, serve him, and obey him in all things. This is your duty to me and to France…”) she knows what is expected of her. Nothing could have prepared her, however, for marriage to a man who cares more for his beloved friend, Piers Gaveston, than he does for his young wife, his reputation and his country.

As Isabella grows older she begins to fall in love with Edward, but when Gaveston is executed in 1312 and another favourite, Hugh Despenser, takes his place in the king’s life, she is forced to accept that her love will never be returned. Despenser repeatedly comes between Isabella and her husband, and eventually she finds herself with a choice to make: should she remain loyal to Edward or should she join forces with one of his noblemen, Roger Mortimer, in an attempt to remove him from his throne?

This fictional account of Isabella’s life is the first book I’ve read by Colin Falconer. I was vaguely aware of his name but knew nothing about any of his books or what I could expect from them, so I was pleased to find Isabella available on NetGalley. I have read about Isabella before (in the Edward II section of The Plantagenets by Dan Jones and in fictional form in Maurice Druon’s Accursed Kings series) and she seemed a fascinating woman, so I was looking forward to reading more.

I have to admit, I wasn’t very impressed with this book at the beginning. The combination of third person present tense, simple sentence structure and very short chapters wasn’t very appealing at all. I kept reading, though, and after a while either the writing improved or I got used to the style – I’m not sure which – and the story did start to become more gripping.

With the novel being written from Isabella’s perspective, she is the character we naturally sympathise with. While we can see that Edward truly loves Piers Gaveston, we can also share Isabella’s humiliation at the lack of respect he shows his wife and her frustration at his inability to rule the country effectively while Piers is around. Things become worse for Isabella when Hugh Despenser takes Gaveston’s place and she eventually begins an affair with Roger Mortimer. I was not convinced by Falconer’s portrayal of Isabella and Mortimer’s relationship, however; there was no chemistry between the two characters and Mortimer himself never came to life on the page.

Isabella is a very quick read and a light one, although not quite as light as I thought it would be at first. It would probably be a good introduction to Isabella’s life if you’ve never read anything about her before, as it does seem to follow the historical facts very closely; it was only the style of the writing that I had a problem with. I was sorry, though, that the novel doesn’t span the whole of Isabella’s life – only her marriage to Edward and the Mortimer rebellion are covered, with nothing of her later years or the reign of her son, Edward III. I was left wanting to know more about some of the people and events mentioned in the novel and am now reading She-Wolves by Helen Castor, a non-fiction book which explores the lives of several medieval queens, including Isabella.

I received a copy of Isabella for review via NetGalley.

8 thoughts on “Isabella by Colin Falconer”