On Saturday I decided to take part in the tenth Classics Club Spin. The rules were simple – list twenty books from your Classics Club list, number them 1 to 20, and the number announced today (Monday) represents the book you have to read before 23rd October 2015.

The number that has been selected this time is 5, which means the book I’ll be reading is: 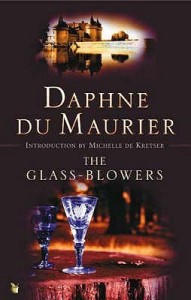 The Glass-Blowers by Daphne du Maurier

I couldn’t be happier with this result as Daphne du Maurier is one of my favourite authors. I have been working my way through all of her novels over the last few years and this is one of only four that I still have left to read.

Here is the synopsis (taken from Goodreads):

The world of the glass-blowers has its own traditions, it’s own language – and its own rules. ‘If you marry into glass’ Pierre Labbe warns his daughter, ‘you will say goodbye to everything familiar, and enter a closed world’. But crashing into this world comes the violence and terror of the French Revolution, against which the family struggles to survive.

Years later, Sophie Duval reveals to her long-lost nephew the tragic story of a family of master craftsmen in eighteenth-century France. Drawing on her own family’s tale of tradition and sorrow, Daphne du Maurier weaves an unforgettable saga of beauty, war, and family.

Have you read this book? Did you enjoy it?

If you’re taking part in the spin too, I hope you’ve got a book you’re happy with!