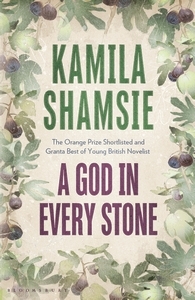 When choosing what to read for this year’s #Diversiverse event, A God in Every Stone was the obvious choice as it also counts towards my Reading the Walter Scott Prize project (it was shortlisted for the 2015 prize). It’s the sixth novel by Pakistani author Kamila Shamsie, but the first one I have read.

The novel opens in July 1914 in Turkey, where twenty-two-year-old Vivian Rose Spencer is working on an archaeological dig led by Tahsin Bey, a friend of her father’s. Vivian is intrigued by tales of Scylax, the ancient Greek explorer who sailed down the Indus River from the city of Caspatyrus (now Peshawar in modern-day Pakistan) and was rewarded by King Darius I with a circlet decorated with figs. As Tahsin Bey tells her of his mission to find the legendary circlet, she finds herself falling in love with him, despite the age difference. Soon, though, she and Tahsin Bey are separated; war has broken out in Europe and Vivian must return home to serve as a VAD nurse in a London hospital.

Another thread of the novel follows a young Pashtun soldier from Peshawar, Qayyum Gul, who has been injured while fighting with the British army at Ypres in 1915. Qayyum is on his way home when he briefly meets Vivian on a train. Having been traumatised by her experiences of wartime nursing, Vivian has decided to travel to Peshawar to continue Tahsin Bey’s search for the Circlet of Scylax. In Peshawar, she gets to know a twelve-year-old boy called Najeeb and awakens in him a passion for archaeology and ancient history.

The stories of these three people – Vivian, Qayyum and Najeeb – come together again fifteen years later in 1930s Peshawar. I think I’ve said enough about the plot now, so I won’t tell you how their characters have developed in the intervening years or the circumstances that lead to their paths crossing again. What I will say, though, is that 1930 is a very significant year in the history of Peshawar, as a group known as the Khudai Khidmatgar campaign to end British rule in India through non-violent means. The novel reaches a dramatic conclusion on the Street of Storytellers during one of the defining moments of the Indian independence movement – and one that I confess to knowing nothing about before reading this book.

A God in Every Stone is an ambitious book, spanning three decades, crossing two continents and tackling some big themes, such as the rise and fall of empires and the loyalties of the people living within those empires. The settings – which include Turkish archaeological sites and the old walled city of Peshawar – are vividly described and I loved the way in which the story of Scylax was worked throughout the novel, its relevance not immediately clear but soon becoming obvious.

Although I found a lot to admire about A God in Every Stone, I still felt that there was something missing: an emotional connection to the characters. I found that the only one I really cared about was Najeeb – his innocence and enthusiasm as a twelve-year-old meant he instantly became my favourite character – but I struggled to feel anything for Qayyum and Vivian, despite the ordeals they both go through. It didn’t help that towards the end of the novel they are pushed into the background as two more characters – Zarina and her sister-in-law, Diwa – are introduced. Choosing to focus on new characters at such a late stage of the book meant that the final scenes set on the Street of Storytellers lacked the impact they should have had.

I did enjoy this book but I couldn’t help feeling that the author had tried to include too much in what is really quite a short novel. I think I would have preferred a longer book giving the characters more emotional depth and exploring the themes in more detail – or maybe a shorter book concentrating on just Vivian’s story or just Qayyum’s. Looking at other reviews of this novel, it was possibly the wrong Kamila Shamsie book for me to have started with; I’m looking forward to trying one of her earlier books and I think Burnt Shadows will be the next one I read.

16 thoughts on “A God in Every Stone by Kamila Shamsie”