The property was situated in a fold of the hills and sloped gently down to the sea. It consisted of meadows and a little wood and some moorland; there was a well, built of glowing yellow stone, which was fed by a spring and was always full of ice-cold water. The water itself was as clear as crystal but the reflection of the stone gave it the appearance of amber…it was this well which gave the property its name, Amberwell. 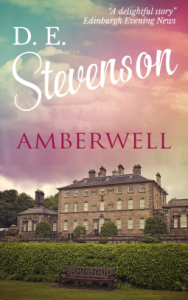 A few years ago I read one of D. E. Stevenson’s most popular novels, Miss Buncle’s Book. I found it a lovely, charming read, but as I said in my review at the time, I thought it ‘lacked that special spark’. I hadn’t really thought about reading any more of her books until I noticed that some of them were being reissued by Endeavour Press. I liked the sound of Amberwell and decided to give Stevenson another chance to impress me.

Amberwell is the name of a house and estate in the south west of Scotland, home to Mr and Mrs Ayrton and their five children: Roger, Tom, Connie, Nell and Anne. The Ayrtons show little interest in getting to know the children; the two boys are sent away to school as soon as possible, their future careers mapped out for them by their father regardless of their own wishes. Education for the girls is not considered important – they remain in the nursery at Amberwell to be raised by Nannie and taught at home by Miss Clarke, who comes in daily.

As the years go by and World War II approaches, the Ayrton children begin to follow their own paths in life. Roger and Tom go off to war while Connie and Anne (under very different circumstances) both leave home, with only the middle sister, Nell, left behind to care for Amberwell. Amberwell itself remains at the centre of the story and even as the Ayrtons move away or move on, it continues to hold a special place in each of their hearts.

I loved Amberwell. I found it very different from Miss Buncle’s Book (a more serious, poignant story rather than a humorous one) but much more to my taste. I was particularly interested in the portrayal of the effects of war on a wealthy family living in a quiet, rural area who at first are shielded from what is going on elsewhere but eventually find that their own way of life is changing too. I could understand Roger’s anger during a conversation with his parents in which he discovers that they are more concerned about losing their servants than they are about Roger himself, who is risking his life for his country.

This is not just a book about war, of course. It’s also a book about Scottish society before and during the war and what it was like to be a young woman growing up in that time and place. And it’s a book about the relationships between brothers and sisters and between parents and children – and the damage which can be caused by a lack of understanding, attention and affection.

The beautiful Connie is the conventional one who does what is expected of her and as such she is the least interesting of the Ayrtons to read about as well as being the hardest to warm to, but I cared very much about the fates of the other four siblings. Anne’s life takes a dramatic turn following a visit to her Aunt Beatrice and we have to wait until the end of the novel to hear the full story of her adventures, while Tom and Roger are both easy to like and their love for Amberwell and their sisters shines through strongly. But this is really Nell’s story – Nell’s and Amberwell’s – and Nell is a wonderful person, offering help and support to those who need it and ensuring that her brothers and sisters have a home to come back to when the war is over.

After finishing this book I was pleased to find that there is a sequel, Summerhills, which I will be reading as soon as I have the opportunity. I would love to know what happens to the characters I’ve become so fond of, particularly Nell, my favourite. I also have a copy of another Stevenson novel, Vittoria Cottage, which I’m looking forward to now that I’ve enjoyed this one so much.

I received a copy of this book for review from Endeavour Press via NetGalley.