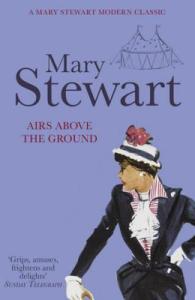 This month, one of my favourite authors, Mary Stewart, would have been 100 years old and to mark the occasion I decided it was time to pick up one of the few remaining books of hers that I still hadn’t read. I chose Airs Above the Ground, a suspense novel set in Austria which was first published in 1965 – and it was a great choice because I loved it!

At the beginning of the novel, our heroine, Vanessa March, is angry and disappointed because her husband, Lewis, has insisted on going to Stockholm on a business trip just when they had been due to leave for a summer holiday in Italy. Left behind in London, Vanessa meets a friend, Carmel Lacy, for tea and is shocked when Carmel mentions that she has just seen Lewis in a newsreel about a circus fire in Austria. Convinced that there must have been some mistake, Vanessa goes to watch the news footage herself and discovers that it’s true – not only is Lewis in Austria when he’s supposed to be in Sweden, he has also been caught on film with his arm around a pretty young girl.

Conveniently, Carmel’s teenage son, Timothy, is hoping to go to Vienna to visit his father and Carmel is looking for someone to act as a chaperone. Determined to catch up with Lewis and find out what’s going on, Vanessa agrees to accompany him. On arriving in Austria, however, Tim admits that he hasn’t been completely honest about his relationship with his father and instead he ends up staying with Vanessa as she searches for Lewis. They are an unlikely pair – at seventeen, Tim doesn’t really need a chaperone, especially not one who is only twenty-four herself – but a friendship quickly forms and together the two become caught up in a mystery involving a travelling circus, a mysterious Englishman and an old piebald horse.

Airs Above the Ground is a book I’ve been looking forward to reading for a long time and I wasn’t disappointed at all. I found so many things to enjoy, first and foremost the beautifully written descriptions of the Austrian countryside, the mountains, the villages and the fictional castle of Schloss Zechstein which becomes the focus of the action for the second half of the story:

And, perched on the outermost edge of the crag, like something straight out of the fairy books of one’s childhood, was the Schloss Zechstein, a miniature castle, but a real romantic castle for all that, a place of pinnacles and turrets and curtain walls, of narrow windows and battlements and coloured shields painted on the stone. There was even a bridge; not a drawbridge, but a narrow stone bridge arching out of the forest to the castle gate, where some small torrent broke the rock-ridge and sent a thin rope of white water smoking down below the walls.

Many of Mary Stewart’s novels involve the heroine forming a bond with a lonely or neglected young boy, and while Timothy is too old to be considered a child, it was still good to watch the relationship between them develop. It’s a relationship based entirely on trust, friendship and mutual liking, with no hints of any romantic attraction at all. Of course, unlike most Stewart heroines, Vanessa is already married before the novel even begins and this does give her character a slightly different feel. Like the others, she’s a strong, intelligent and resourceful woman but she’s clearly in awe of Lewis, and although I did enjoy her interactions with her husband, it seemed that whenever he was around she tended to place too much reliance in him and lost some of that strength and resourcefulness.

I also loved Old Piebald, the horse whose master died in the circus fire and whose injured leg Vanessa treats using her veterinary skills. The scene at the end of Chapter 9 where he is grazing in a meadow with circus music playing in the distance has to be one of my favourite moments in all of Mary Stewart’s novels! Horses play an important role in the story – Tim’s real reason for coming to Austria is to get a job with Vienna’s famous Spanish Riding School and it was nice to have an opportunity to learn more about the school and its beautiful Lipizzaner stallions. The novel takes its title from the movements performed by these horses, known as the ‘airs above the ground’.

As well as all of the other things I’ve mentioned, there’s also plenty of drama, including a desperate race around the castle battlements, a car chase and a scene involving a mountain railway train. Airs Above the Ground hasn’t become one of my absolute favourite Stewart novels, but it’s definitely in my top five or six (I’ve read eleven of her suspense novels so far, plus three of her Arthurian novels). Have you read this one? And have you done anything to celebrate Mary Stewart’s centenary?

18 thoughts on “Airs Above the Ground by Mary Stewart”