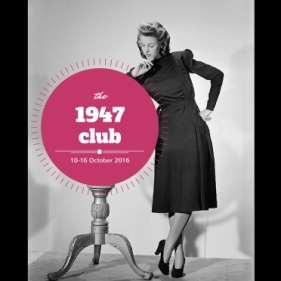 This week, Karen (of Kaggsy’s Bookish Ramblings) and Simon (of Stuck in a Book) are hosting a 1947 Club. The idea is that we all read and review books which were published in 1947, forming an overview of the literary world in that particular year. Having enjoyed the books I read for the first two clubs – 1924 and 1938 – I’ve been looking forward to taking part in this one.

First, here are some reviews of 1947 novels previously posted on my blog:

Alone in Berlin by Hans Fallada

Prince of Foxes by Samuel Shellabarger

I can highly recommend all three of those – and I also enjoyed the book I chose to read for the club: Agatha Christie’s The Labours of Hercules. I love Christie and as it’s been a while since I read one of her books, I was pleased to find that she’d had one published in 1947!

The Labours of Hercules begins with a foreword in which we learn that Hercule Poirot is planning to retire from crime-solving and devote himself to the growing of marrows. Before giving up detective work for good, he decides to take on twelve more cases, each inspired by one of the twelve Labours of Hercules from Greek mythology. This is in response to a friend who has pointed out that although Poirot may be Herculean by name, he is hardly Herculean by nature!

The foreword is followed by twelve stories, each one a complete mystery in itself. If you’re familiar with the original Labours of Hercules (Poirot himself admits to having no knowledge of the Classics and has to do some research before beginning his mission), you will know that the first one involves the slaying of the Nemean Lion. The ‘lion’ of Poirot’s first Labour is slightly less terrifying – a Pekinese dog stolen during a walk in the park – but it forms the basis of a case which is much more intriguing than it initially appears. The other stories in the book are also loosely related to the Labours but instead of tackling monsters and wild beasts, Poirot finds himself facing an assortment of thieves, drug dealers, kidnappers and murderers.

Until now, I have only read full-length Poirot novels and have avoided the short story collections as I often find short stories disappointing, lacking the depth and complexity I prefer in longer books. However, this particular collection is surprisingly satisfying; fun to read, nicely varied and with at least one clever twist in each story. I’m not going to discuss all of them here, but a few of my favourites were The Stymphalean Birds, in which Poirot attempts to rescue a British politician from the clutches of a pair of blackmailers, and The Cretan Bull, where a young woman seeks Poirot’s help after her fiancé ends their engagement because he fears he’s going insane. I also enjoyed The Erymanthian Boar, set in a hotel on top of a mountain in Switzerland to which Poirot has travelled in the hope of disturbing a rendezvous arranged by a dangerous Parisian gangster.

Poirot is very much alone throughout most of his adventures in this book. We don’t see anything of Captain Hastings, but other recurring characters from the series do make an appearance in some of the stories, including Chief Inspector Japp, Poirot’s valet, Georges, and his secretary, Miss Lemon (I loved her brief but hilarious role in the final story, The Capture of Cerberus, when Poirot asks her what she would do if a friend wanted to meet her in Hell).

Apart from one or two stories towards the end which I found slightly weaker than the others, I really enjoyed reading this collection. I’m sorry that I’m not going to have time to read anything else this week for the 1947 Club, but I’m pleased that the one book I have read proved to be such a good choice!

17 thoughts on “The 1947 Club: The Labours of Hercules by Agatha Christie”