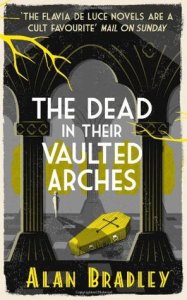 I love Alan Bradley’s Flavia de Luce series. I love the 1950s setting, I love getting to know the inhabitants of Buckshaw – the de Luce estate in the little English village of Bishop’s Lacey – and most of all I love Flavia, our eleven-year-old narrator with a talent for solving mysteries and a passion for chemistry and poisons. The Dead in Their Vaulted Arches, though, is probably my least favourite Flavia novel so far. I found it quite disappointing, but I’m hoping it’s just that I was in the wrong mood for it and that things will get back to normal when I pick up the next book in the series.

The first Flavia novel, if you’re like me and prefer to read a series in order, is The Sweetness at the Bottom of the Pie. The Dead in Their Vaulted Arches is book number six and although some of the earlier novels could probably be read as standalones, I wouldn’t recommend reading this particular book until you’ve read the fifth one, Speaking from Among the Bones, because it ended on a cliffhanger – and this one picks up the story from that point.

The de Luce family have been joined by their friends and neighbours on the platform at Buckshaw Halt, waiting for the arrival of the train bringing Flavia’s mother, Harriet, home to Bishop’s Lacey. Flavia has never known her mother – she was just a baby when Harriet went missing (presumed dead), in Tibet ten years earlier. It’s an emotional day for Flavia and her family, then, but it’s also an eventful one in other ways…a stranger at the station begins to give Flavia a cryptic message, but moments later he is found dead beneath the wheels of the train as it leaves. Did someone push him? And could his death be connected with what happened to Harriet?

I think every time I’ve written about this series I’ve said that the mystery-solving is only one small element of each book and that the real charm is in the setting, the characters and Flavia’s narration. In this particular novel the mystery is almost non-existent and Flavia doesn’t get a chance to do the detective work she usually does, searching for clues and making lists of suspects. This gives The Dead in Their Vaulted Arches a different feel from the rest of the series and I think that could be why I didn’t like it as much. It seems that the mystery element was more important to me than I thought it was! That’s not to say, though, that there were no secrets to be uncovered here and no revelations to be made – because there certainly were.

Flavia, who was ten years old when we first met her, is now nearly twelve and I think Alan Bradley is doing a great job of showing the subtle changes in her character from one book to the next as she begins to grow up. Things happen in this book which require a more mature attitude from Flavia and she is forced to make some difficult decisions, but there are also times when she still behaves like the child she is – for example, when she becomes convinced that she will be able to use her chemical skills to reanimate a dead body.

With a storyline based around Harriet’s return, most of the action in this novel takes place in and around Buckshaw which means Flavia spends a lot of time with the other de Luce family members. Her relationships with her father and her sisters, Daffy and Feely (Daphne and Ophelia), are still strained, but some of the information revealed in this book helps us to understand why this is. I’ve been wondering since the beginning of the series why Daffy and Feely had such a problem with Flavia, so I’m pleased that things have finally become a bit clearer!

I’m not sure whether I liked the direction the story went in towards the end of the book but I’m still looking forward to reading As Chimney Sweepers Come to Dust, and hoping I will like it better than this one.