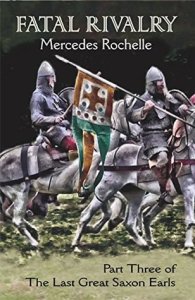 This is the third and final novel in Mercedes Rochelle’s Last Great Saxon Earls trilogy, completing the story begun in Godwine Kingmaker and The Sons of Godwine. Set in 11th century England, just before the Norman Conquest, Godwine Kingmaker told the story of Godwine, the powerful Earl of Wessex, while in The Sons of Godwine the focus switched to the Earl’s children – sons Harold, Tostig, Gyrth, Leofwine and Wulfnoth, and daughter Editha. Fatal Rivalry picks up where that book left off, describing the events leading up to the Battle of Hastings in 1066.

As the novel opens in 1064, Edward the Confessor, Editha’s husband, is still on the throne of England, but the question of his successor is on everybody’s minds. Editha’s brother Harold, who has inherited his father’s earldom of Wessex, has recently returned from Normandy, where he was made to swear an oath to support the claim of Duke William – not an oath Harold intends to keep, because he believes there is a better candidate for the throne: himself. History tells us that Harold will become king in 1066, only to be defeated by William at Hastings later that same year. Fatal Rivalry explores one theory as to why things went so disastrously wrong.

In The Sons of Godwine, we saw how Harold and his younger brother Tostig had been rivals since they were children; in this book the rivalry intensifies. As Earl of Northumbria, Tostig has become very unpopular with his people, particularly after attempting to raise taxes on Harold’s orders. When Tostig’s Northumbrian thegns rebel against him, King Edward sends Harold to negotiate with them. Seeing that the situation is hopeless, Harold agrees to their demands and Tostig is sent into exile. Unable to forgive his brother for siding against him, Tostig searches for new alliances overseas, finally joining forces with the Norwegian king, Harald Hardrada, and setting in motion a chain of events which contribute to Harold’s downfall.

Like the previous novel, this one is presented as the memoirs of the Godwineson brothers, with each one given a chance to narrate his own parts of the story. Leofwine and Gyrth have smaller roles to play, while Wulfnoth, held hostage at Duke William’s court in Normandy, makes only a few appearances – until the end, when he takes on the very important job of concluding his brothers’ stories. Understandably, it’s Harold and Tostig who get most of the attention. I’ve never read about Tostig in this much detail before and I did have some sympathy for him. I’m sure Harold was doing what he thought was in the best interests of the country, but to Tostig it must have seemed like an unforgivable betrayal, particularly when he learned that Harold had married the sister of Morcar, his replacement as Earl of Northumbria.

Fatal Rivalry is an interesting read and probably my favourite of the three books in this trilogy. Because the novel covers a relatively short period of time, it allows the author to go into a lot of detail in exploring the relationship between Harold and Tostig, the motivation behind their actions and how their rivalry could have been the reason why Harold was fighting a battle in the north of the country when William invaded from the south. I am not really a lover of battle scenes, but although there are two major battles which take place in this book – Stamford Bridge and then Senlac Hill (Hastings) – this is only one aspect of the novel and plenty of time is also spent on the more personal lives of the characters, such as Tostig’s relationship with his wife, Judith, and Harold’s marriages to Edith Swanneck and Ealdgyth of Mercia.

I think the Norman Conquest is fascinating to read about and, like many periods of history, there is so much left open to interpretation and debate. I will continue to look for more fiction set in this period and will also be interested to see what Mercedes Rochelle writes about next.

Thanks to the author for providing a copy of this book for review.