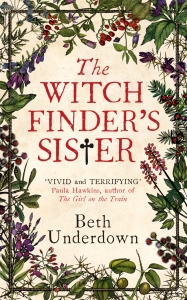 The Witchfinder’s Sister is Beth Underdown’s first novel. I was drawn to it first by the title and the cover, but the subject – the English witch trials of the 1640s – appealed to me too.

The title character is Alice Hopkins, a fictional sister of Matthew Hopkins, the self-styled Witchfinder General who was believed to be responsible for the deaths of hundreds of women in England over a period of several years in the middle of the 17th century. At the beginning of the novel, following the death of her husband in London, Alice is returning to Manningtree, Essex, where her brother still lives. The two have not been on good terms ever since Alice married the son of a servant, Bridget, whom Matthew blames for the childhood accident which has left his face scarred. Now, though, she hopes they can put the past behind them and move on.

Moving into her brother’s lodgings at the Thorn Inn, Alice is relieved to find that he is willing to let her stay with him – but she quickly discovers that the years have changed Matthew and that he is not the same man she left behind. She hears disturbing rumours about him in the town, linking him with accusations of witchcraft against local women, and when she discovers that he is making lists and collecting evidence, Alice must decide whether or not to intervene.

The novel gets off to a slow start as characters are introduced and background information is provided, with lots of flashbacks to earlier events in Alice’s and Matthew’s lives, but after a few chapters the pace begins to pick up. Not knowing much about the real Matthew Hopkins, I found Underdown’s portrayal of him very intriguing. The lack of known facts relating to his early days gives her the freedom to create a convincing backstory for him, and I appreciated the way she delves into his personal history, revealing family secrets and trying to show how incidents from his childhood may have helped to shape the man he will become. Only seeing him through Alice’s eyes – the novel is written in the first person – makes it difficult to penetrate below the surface and really understand him, but that just makes him all the more chilling and unnerving.

I thought Alice was a less interesting character, maybe because her main role as narrator is to tell the story of Matthew and the women accused of witchcraft rather than taking an active part in events herself. I found her slightly bland – although I did have some sympathy as she was forced to stand by and watch as her brother carried out his terrible deeds, not knowing what she could say or do to help his victims. It would have been nice to have had the opportunity to get to know some of the so-called witches in more depth; most of them were little more than names on the page, and I think if I had been able to care about their fates on an emotional level that would have added an extra layer to the novel. Having said that, I was fascinated by the descriptions of Hopkins’ methods of identifying witches, particularly the one referred to as ‘watching’ – I had heard about that before, but hadn’t fully appreciated the discomfort and torment involved in it.

The book ends in a way that is slightly difficult to believe, but I liked it and thought it added a good twist! Based on this novel, I think Beth Underdown can look forward to a successful writing career; there were things that I liked about it and others that I didn’t like as much, but on the whole I enjoyed it and would certainly be interested in reading more by this author.

Thanks to the publisher for providing a copy of this book for review via NetGalley.

14 thoughts on “The Witchfinder’s Sister by Beth Underdown”