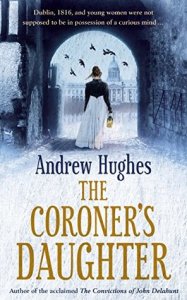 I found so much to love in The Coroner’s Daughter! A strong, resourceful heroine with a passion for science; an interesting historical setting – 19th century Dublin; and a twisting, turning mystery to keep me guessing. Just like Andrew Hughes’ first novel The Convictions of John Delahunt, which I read and loved a few years ago, this is another great book which manages to be both highly entertaining and darkly atmospheric.

The story takes place in 1816, known as the ‘Year Without a Summer’. The city of Dublin is shrouded in fog and when a frosty July is followed by snow in August, people are at a loss to explain what is going on. Eighteen-year-old Abigail Lawless, however, has conducted her own research into the phenomenon, linking the unseasonable weather to a volcanic eruption on the other side of the world. As the coroner’s daughter, Abigail has always possessed a natural curiosity for anything scientific – and is particularly interested in her father’s work, performing autopsies to establish the cause of death.

When a young servant in a neighbouring household is accused of murdering her newborn baby – and is found dead before the inquest can be held – Abigail is sure there is more going on than meets the eye. She easily discovers the identity of the maid’s lover, but this is only the beginning. The strict religious sect known as the Brethren has been increasing in size and power since their influential leader, Mr Darby, arrived in Dublin the previous year. As she continues to investigate, assisted by her father’s young Scottish apprentice, Ewan Weir, Abigail becomes convinced that the Brethren are connected with the death of the maid and her baby. But who else might be involved? And if Abigail becomes too deeply involved herself, could she be putting her own life in danger?

I really enjoyed The Coroner’s Daughter. I think I preferred John Delahunt as the plot seemed more original and unusual, but this book is excellent too. I loved following Abigail around the Dublin of 1816 which, thanks to the gloomy and oppressive weather, is a very atmospheric setting. Our heroine’s investigations take her to a variety of locations from the Lying-In Hospital at the Rotunda to the smart terraced houses of Fitzwilliam Square and a clockmaker’s workshop on Abbey Street – and all of these are vividly described. Although it’s quite a dark story, it’s written with a lot of humour, which was obvious from the very first sentence: For my eighteenth birthday, Father promised me the hand of a handsome young man, which he duly delivered mounted in a glass bell-jar. First sentences can be so important and that one captured my attention immediately!

I found the scientific aspect of the novel particularly interesting. The story takes place at a time when the fanatical religious views of groups such as the Brethren are coming into conflict with the work of scientists such as the astronomer Professor Reeves, a friend of Abigail’s father. As a woman, Abigail faces additional obstacles, as is seen when she is forced to submit one of her reports to a scientific journal under her father’s name in order to get published, and again when she is the only female member of the audience at an astronomy lecture given by Professor Reeves. Mr Lawless does try to encourage his daughter to be more ‘feminine’ but at the same time, not having any sons, there’s the sense that he is only too pleased to have someone to share his knowledge and passion with!

Now I’m hoping Andrew Hughes will write more books about Abigail Lawless. She’s a great character and the way the novel ended makes me think that she could easily be brought back for a sequel. If not, I will look forward to reading whatever he writes next.