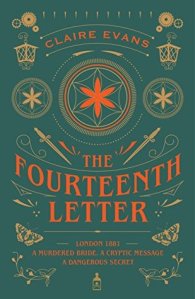 With its eye-catching cover, Victorian setting and promise of “a labyrinth of unfolding secrets”, Claire Evans’ debut novel The Fourteenth Letter sounded like a book I really needed to read!

The novel opens in June 1881 with the murder of Phoebe Stanbury at a party to celebrate her engagement to Benjamin Raycraft, son of the wealthy Sir Jasper. The killer, a naked man covered in mud with a strange design tattooed on his chest, disappears after committing the crime and it seems that nobody is able to shed any light on his identity or why he may have wanted to kill an innocent young woman. Detective Harry Treadway is given the job of investigating the murder, but the deeper he delves into the mystery, the more bizarre and complex it becomes.

Meanwhile, William Lamb, an inexperienced, timid young lawyer, goes to visit an eccentric client in his partner’s absence – and ends up in possession of a casket of old papers written in Latin and a cryptic message which means nothing to him. His visit is witnessed by Savannah Shelton, an American woman who has been paid to watch the house, but who is employing her and what do they want? At another house in London, Mildred is applying for a position as governess, then changes her mind when the interview doesn’t go as planned. How are all of these events connected? There are no obvious links at first, but slowly the truth is revealed as the story begins to unfold.

When I first started to read The Fourteenth Letter, I was fascinated. There were so many intriguing characters and so many strange things happening all at once. However, the constant switching from one storyline to another made it difficult for me to settle into the story and after a few chapters I began to wish we could spend a little bit longer with one character before moving on to the next. As I’ve said, the various strands of the plot do start to come together eventually but I would have liked it to have happened more quickly.

Being set in the 1880s, the story takes place during an exciting time in history, a time of great advances in science and technology. Sir Jasper Raycraft’s house, Ridgeside, is described as a famous residence with all the latest scientific developments such as electric light. I immediately recognised this as a description of Cragside in Northumberland, a National Trust property I have visited several times, and I was pleased to have this confirmed when I reached the author’s note!

However, for a novel set in Victorian London, I thought there was very little sense of time and place. Although there are references to historical and political events of the period, I never felt fully immersed in the world Claire Evans had created and it didn’t help that I couldn’t quite manage to believe in Savannah Shelton as a convincing character. William Lamb, though, is a great character – not a typical hero at all – and it was interesting to watch him develop and grow as a person over the course of the story.

Although this is certainly a very unusual and imaginative novel, I didn’t like it as much as I’d hoped to. Maybe I was just not the right reader for this particular book; that happens sometimes and it doesn’t necessarily mean that it isn’t a good book. I’ve seen some very positive reviews so clearly other readers are finding a lot to enjoy in The Fourteenth Letter!

Thanks to the publisher for providing a copy of this book via NetGalley for review.

15 thoughts on “The Fourteenth Letter by Claire Evans”