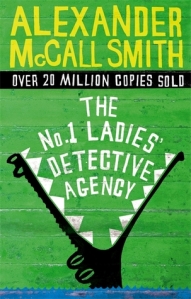 Alexander McCall Smith’s No. 1 Ladies’ Detective Agency books seem to have been around forever, but I have never really felt tempted to try one. It didn’t help that whenever I noticed some on the library shelf, they tended to be the later books in the series and my personal preference is always to start at the beginning if possible…so when I had the chance, earlier this year, to read the first book in the series via NetGalley, I thought it would be a good opportunity to finally see what it was like.

The No. 1 Ladies’ Detective Agency is set in Botswana and features thirty-four-year-old Mma Precious Ramotswe. When her father dies, leaving his herd of cattle to Precious, she sells them and uses the money to buy herself a house and an office which becomes the headquarters of her very own detective agency. She hangs a sign above the door, employs a secretary, then sits back and waits for clients. They do come, eventually, and Mma Ramotswe finds herself with an intriguing selection of cases to investigate.

This is not a straightforward detective novel with one central mystery to be solved; instead, there are lots of separate little mysteries, with only a few pages devoted to some of them, although a few are longer. They are not particularly complex – I often managed to solve them myself, which is unusual for me – and deal mainly with cheating husbands, rebellious teenagers and cases of insurance fraud, for example, rather than more serious crimes. Mma Ramotswe takes a practical approach to her detective work, based around common sense and logic, and following the guidance of The Principles of Private Detection by Clovis Andersen. Sometimes she makes mistakes, but more often than not she is successful and proves that those who tell her women can’t be detectives are most definitely wrong!

As well as the mysteries, there are also chapters relating earlier episodes in Mma Ramotswe’s life, descriptions of Botswana – its scenery, its wildlife and its people – and some insights into African culture. The novel is disjointed and messy and, apart from one slightly more involved case to which we return several times throughout the book, there is no overarching plot. And yet, somehow, it does work! I really enjoyed getting to know Mma Ramotswe and picking up a little bit of knowledge of a country I previously knew nothing about.

I haven’t been left wanting to rush out and buy all the other books in the series, but I would be happy to try another one at some point. Maybe those of you who are familiar with Alexander McCall Smith’s work can tell me if it’s necessary to read this series in order or if you can just dip in and out. Are they all as episodic as this one? And are there any of his other books or series that you would recommend?

24 thoughts on “The No. 1 Ladies’ Detective Agency by Alexander McCall Smith”