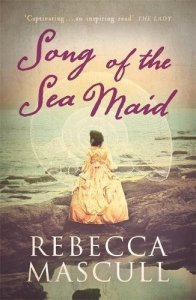 Having had such a good experience with my first Rebecca Mascull book, The Wild Air, I knew I would have to read her previous two novels as well – and I was delighted to see Song of the Sea Maid on the shelf on a recent visit to the library. I hoped I would love it as much as The Wild Air…and I did. In fact, I thought this one was even better.

Song of the Sea Maid begins with a little girl living on the streets of London with only one aim in life: to do whatever it takes to survive from one day to the next. When her sole friend and companion, an older boy who may or may not be her brother, is taken by a press gang, she finds herself all alone. Caught attempting to commit a desperate act – stealing from a gentleman – she expects to be punished, but instead she is taken to an orphanage where she is given food, shelter and the name Dawnay Price.

Dawnay is an intelligent child with a natural curiosity for the world around her. As she grows older and teaches herself to read and write, her thirst for knowledge becomes apparent and she is chosen by a generous benefactor to receive a full education. It is not at all common at this time for a girl to be educated beyond the absolute basics, so Dawnay is determined to make the most of the opportunities she has been given. Eager for new experiences and the chance to use her skills, she travels to Portugal and the Berlengas islands where her studies of the flora and fauna lead her to come up with some very controversial theories. It seems the 18th century world is not quite ready for Dawnay and her ideas!

Song of the Sea Maid is a wonderful exploration of what it was like to be a woman trying to forge a career in science in a period when it was not considered normal or socially acceptable to do so. Dawnay has a lot of good luck which enables her to indulge her passion for study and travel, but she also faces many obstacles in both carrying out her work and in making her findings known, and by the end of the novel it becomes clear that she really is, as Rebecca Mascull states in her author’s note, just the wrong person in the wrong place at the wrong time. It made me wonder about all the other people – women in particular, but men as well – throughout history who may have had innovative ideas or developed advanced theories but were dismissed and silenced so that their names and their views have been entirely forgotten today.

I also enjoyed reading about the various places Dawnay visits on her travels; her time spent alone on the Berlengas Islands is particularly interesting – I think I would have felt too isolated and lonely, but Dawnay finds peace and harmony there, coming to think of the rocks and caves as her own. Still, she is unable to completely escape from world events; she is in Lisbon for the Great Earthquake of 1755 (which I have previously read about in Linda Holeman’s The Devil on Her Tongue) and in Minorca a year later when the island is captured by the French. The Seven Years’ War forms an important backdrop to the novel and from time to time Dawnay is brought into contact with the crew of a Royal Navy ship, initially during her voyage to Portugal. I found all the ship-based scenes surprisingly enjoyable – I think my recent forays into Patrick O’Brian’s Aubrey/Maturin series have really helped me in this respect!

I haven’t mentioned yet that Dawnay also falls in love; I found it quite predictable – as soon as one particular character appeared in Dawnay’s life I knew that they were going to be the love interest – but it was still a beautifully written romance which developed slowly throughout the novel. There’s really nothing negative I can say about Song of the Sea Maid; even the use of first person present tense, which I often dislike, didn’t bother me – in fact, I barely noticed it because I found Dawnay’s voice so strong and real.

This is a lovely novel and now I really must read Rebecca Mascull’s first book, The Visitors!

14 thoughts on “Song of the Sea Maid by Rebecca Mascull”