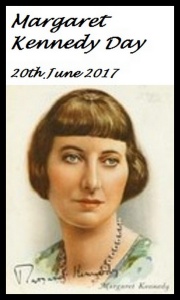 For this year’s Margaret Kennedy Day, hosted by Jane at Beyond Eden Rock, I decided to read Lucy Carmichael, Kennedy’s tenth novel, published in 1951. With so many of her books still unread to choose from – I’ve previously read only The Constant Nymph and Troy Chimneys – I had no real reason for picking this one over the others, but it’s one of Jane’s favourites so I hoped I had made a good choice!

Lucy Carmichael, as you would expect, follows the story of Lucy Carmichael who, as the novel opens, is preparing for her wedding to Patrick Reilly. It should be one of the happiest days of Lucy’s life, but instead it is one of the worst: Patrick doesn’t turn up, the wedding doesn’t take place and Lucy is left devastated. As she tries to come to terms with what has happened, she decides that if she is to move on with her life she needs to get away and start again in a place where nobody knows about her past. And so she jumps at the chance to take a new job at an arts institute in another town, which sounds like just the sort of change she needs. 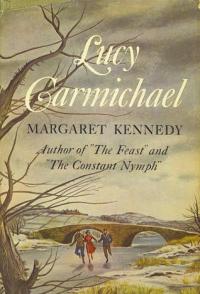 Settling into her new home and new job in Ravonsbridge, Lucy makes new friends, forms new relationships and becomes a valued member of the community. Eventually she will even have the chance to love again, although it will take her a while to get to that point as she now has different priorities and more experience, and wants to get things right this time. Apart from the drama of the opening scenes this is not a very dramatic story, but there is still a lot going on in Lucy’s life and I won’t delve into the plot in any more detail as I wouldn’t want to spoil any little surprises for future readers.

Margaret Kennedy shows a lot of understanding and sympathy for Lucy’s situation; being jilted at the altar is, thankfully, not something I have experienced myself but if it did happen I hope that I would have the strength to react the way Lucy does, with dignity and resilience, rather than allowing her heartbreak and humiliation to destroy the rest of her life. Lucy is also lucky that she has a close and loyal friend – Melissa – who keeps in touch with her after she leaves home, and although the story of their friendship is told mainly in the form of letters, it was one of my favourite aspects of the book.

But although I did enjoy this book – very much so – I couldn’t quite love it. I thought the story lost its way a little bit during the second half of the book and while Lucy’s work in the community was still interesting to read about, I wasn’t as absorbed as I was at the beginning. Last year for Margaret Kennedy Day I read Troy Chimneys, which turned out to be one of my books of the year; of all Kennedy’s novels, I suspect that was the perfect one for me and that I can’t expect the others to satisfy all of my personal reading tastes in quite the same way. Still, it was lovely to meet and get to know Lucy!