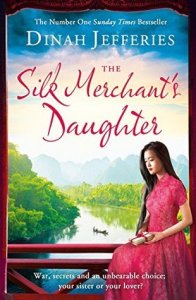 After reading and loving Dinah Jefferies’ The Tea Planter’s Wife last month, I immediately added another of her books, The Silk Merchant’s Daughter, to my 20 Books of Summer list, hoping for another great read.

The Silk Merchant’s Daughter is set in French Indochina, the name formerly given to the group of French colonial territories which included Vietnam, Cambodia and Laos. The title character – and our heroine – is Nicole Duval, the eighteen-year-old daughter of a French silk merchant based in Hanoi, the capital city. The period during which the story takes place is a turbulent time in the history of the region and Jefferies provides a useful timeline at the front of the book for those of us who need some help in understanding the sequence of events.

As the novel opens in 1952, Nicole learns that her father is planning to hand over the running of the entire silk business to her older sister, Sylvie, leaving Nicole with only one small, neglected silk shop in the Vietnamese quarter of the city. Nicole is disappointed and resentful; her relationship with Sylvie has been difficult from childhood and yet again, Nicole has been made to feel inferior. To make matters worse, the man she loves – Mark, an American trader who is in Hanoi on mysterious government business – has previously been in a relationship with her sister, and Nicole is not at all sure that he and Sylvie no longer have feelings for each other.

Determined to make the best of things, Nicole opens up the little silk shop and it is here, living and working among the Vietnamese people, that she begins to understand their discontent with French rule. With the help of Tran, a militant with the revolutionary group the Viet Minh, Nicole’s mind is opened to new ideas and views. Being half Vietnamese herself – she has inherited her looks from her late Vietnamese mother, whereas Sylvie resembles their French father – Nicole has a certain amount of sympathy for Tran and his friends. But Mark and the Duvals will be on the opposite site of the coming conflict, so Nicole needs to decide where and with whom her loyalties lie.

The Silk Merchant’s Daughter is another enjoyable and engaging novel from Dinah Jefferies, bringing to life the history of a place about which I previously knew very little. Having learned about the Malayan Emergency in The Separation and 1920s Ceylon in The Tea Planter’s Wife, it was good to have the opportunity this time to add to my knowledge of Vietnam. I haven’t read much about the Vietnam War and nothing at all – until now – about the years immediately preceding it, encompassing the rise of the Viet Minh and the First Indochina War. It was also interesting to read about French colonialism, which made a change from reading about British colonialism!

Writing the novel from the perspective of Nicole was a good decision by Jefferies, as she is in the unusual position of being both French and Vietnamese. However, I never really felt that she was truly torn between the two and it seemed fairly obvious to me which side, and which man, she would eventually choose, and that took some of the tension and emotion out of the story. There are some wonderful descriptions of Vietnam, from the sights, sounds and smells of the streets of Hanoi to the colours and textures of Nicole’s silks, but on the whole I found this book slightly disappointing after the very high standards set by The Tea Planter’s Wife.

Although this is not my favourite Dinah Jefferies book, I am still looking forward to reading Before the Rains, her new novel set in India.

11 thoughts on “The Silk Merchant’s Daughter by Dinah Jefferies”