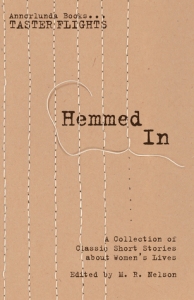 This is another collection of classic short stories edited by M.R. Nelson. I have previously read two of her others – Love and Other Happy Endings and Small and Spooky – and enjoyed them both, so I was looking forward to finding out what was in store this time! Nelson calls her collections ‘taster flights’ because they give us a taste of each author’s writing; this particular book contains only one author (Willa Cather) whose work I have previously read – the other five were new to me. Although the stories are very different, they are all linked by a common theme. The title, Hemmed In, should be a clue as to what that theme is!

The opening story is A Jury of Her Peers (1917) by Susan Glaspell, in which a sheriff and a witness are accompanied by their wives on a visit to a house where, it appears, a woman has murdered her husband. This is a cleverly written story, showing how men and women can perceive the same situation differently. The two wives in the story pick up on things that their husbands would never have noticed and are able to use their own knowledge and experience to understand the misery and oppression that may have led the accused woman to commit murder. I have never read anything by Susan Glaspell before but I’m aware that two of her novels have been published by Persephone and now I’ll have to consider reading them.

Kate Chopin’s A Pair of Silk Stockings (1897) appears next and follows the story of Mrs Sommers, who unexpectedly finds herself in possession of fifteen dollars and the luxury of deciding what to spend the money on. She knows she should be sensible and buy things for her children, but when a pair of beautiful silk stockings catches her eye, she finds it hard to resist. Despite being so short, this is a powerful story about how a woman reacts when given the chance to escape her responsibilities and have just one day to herself.

The next story – probably the most famous of the six – is one that I’ve wanted to read for a while and I’m pleased that I’ve finally had the opportunity. It’s The Yellow Wallpaper (1892) by Charlotte Perkins Gilman, in which a woman is prescribed a rest cure for a ‘nervous complaint’. Spending hour after hour alone in a room at the top of the house, the narrator becomes obsessed with the patterns on the yellow wallpaper because she has nothing else to stimulate her mind. This is a disturbing and unsettling story, but also a fascinating one and I can see why it is considered a feminist classic.

In Little Selves (1916) by Mary Lerner we meet Margaret O’Brien, an elderly woman who is dying and looking back on her earlier life. Not having had any children, she thinks instead about the little girls who were her own younger selves and laments the fact that ‘there’s all those poor dear lasses there’s nobody but me left to remember, and soon there’ll not even be that’. This is an interesting and unusual story by an author I’ve never come across before.

Edna Ferber is yet another author I’ve never read until now and although her story The Leading Lady (1912) is probably my least favourite in this collection, I did still enjoy it. The main character is an actress on tour with a small company and suffering from loneliness and boredom. Like the woman in Kate Chopin’s story, she jumps at the chance to break out and do something different for the day.

Finally, we have a story by Willa Cather, The Bohemian Girl (1912). This one feels slightly different from the previous five as it features a male protagonist, Nils Ericson, who is returning to his hometown after an absence of many years. However, once his sister-in-law Clara Vavrika arrives on the scene and we learn a little bit about her life, I could see why this story had been included along with the others. It’s the longest and most developed story in the book – more of a novella, I would say – and I found it very reminiscent of My Ántonia.

I loved reading Hemmed In. It contains a great selection of stories, all six of which could be considered important works of feminist literature. Of course, I could have read them at any time as they have all been published in other books or are in the public domain and available online, but I wouldn’t have read them all together and that’s what makes M.R. Nelson’s anthologies so good. It’s always interesting to read her thoughts at the back of the book on why she chose each particular story and how it fits with the overall theme. Best of all, I have now been introduced to five new authors, all of whom I would like to explore further!

8 thoughts on “Hemmed In edited by M.R. Nelson”