A selection of words and pictures to represent November’s reading

“Why do you keep all those rooms empty, Cousin Clarissa?” she asked.

“Because I cannot afford to furnish them in the style they demand, my dear,” was the reasonable reply. “I had rather live in the part of a beautiful house than in the whole of an ugly one. You will allow that an old woman has a right to her fancies.”

“I call it very sensible,” said Nigel. “You have an elastic house. You can expand or contract within it according to the fluctuations of your income.”

“Mr Strangeways,” announced Clarissa Cavendish, “I perceive we are going to understand each other.”

The Corpse in the Snowman by Nicholas Blake (1941)

Did he think to win them over like this? She remembered the boyish charm he had once possessed and wondered where it had gone. Perhaps like a bag of gold dust with an open top, the winds of time had swirled it away in a glittering spiral until there was nothing left but an empty pouch.

The Autumn Throne by Elizabeth Chadwick (2016)

A Midsummer Night’s Dream – title page from the first quarto, printed in 1600

It was nonsense, of course! It was, as Hippolyta says of Pyramus and Thisbe, ‘the silliest stuff that ever I heard.’ But somehow the nonsense worked. It is one of the marvels of the playhouse that whatever you lay in front of the groundlings, they believe. “They want to believe,” my brother once explained. “They do half our work for us. They come wanting to be amused, to be impressed, to be awed, to be frightened. And they have imaginations too, and their imaginations amend our work.”

Fools and Mortals by Bernard Cornwell (2017)

I knew what it was to lose someone to the clutches of despair; I knew what it was to be robbed of a voice. And the mad had all too often been abandoned to such – to empty rooms furnished only with straw, chained to the walls, their every utterance made the subject of mockery and laughter. I must never allow myself to judge; not before I had listened, touched – treated the person before me rather than any preconceptions formed against them.

The Crow Garden by Alison Littlewood (2017)

The pearls must be somewhere. They must search the rooms again. Could not Lord Peter Wimsey, with his experience of – er – mysterious happenings, do something to assist them?

“Eh?” said his lordship. “Oh, by Jove, yes – by all means, certainly. That is to say, provided nobody supposes – eh, what? I mean to say, you don’t know that I’m not a suspicious character, do you, what?”

Murder Under the Christmas Tree edited by Cecily Gayford (2016)
(Taken from Dorothy L. Sayers – The Necklace of Pearls) 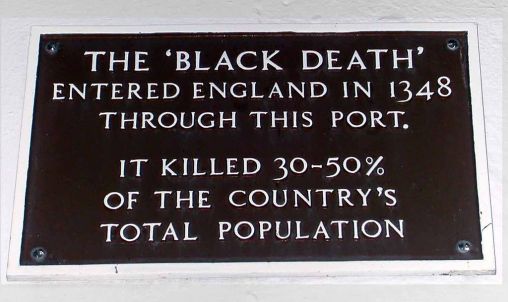 Plaque in Weymouth, England, noting the entrance of plague into the country.

“I doubt that it’s his advice, milady.” He turned with a cynical smile. “Where’s the sense in shutting our gates against a mild affliction that kills no one? For myself, I would rather have news of how the pestilence is affecting our neighbours than refuse them entry for fear of catching a headache.”

“You may change your mind when your head begins to ache in earnest. From my experience, the best cure for a disease is never to catch it.”

The Last Hours by Minette Walters (2017)

It is a big grandfather clock, nearly old enough to be in keeping with the hall, and with a loud and – as you would think – peculiarly slow tick. You know how competent actors can build up an illusion of overwhelming suspense, of mere, sheer waiting? I suddenly found the clock doing all that for me. In other words I found myself projecting upon an elderly and impersonal scientific instrument a mounting and urgent sense of impending catastrophe.

How many young women could dream of freedom, after all? Others were tied to a husband just as these girls were tied to this Queen Mary.

Blinded to much of life, like the hooded hawks in the palace mews, they had no real understanding of the stakes of this game. But unless they were greater fools than they looked, they might still be given a few cards to play.

Strange, isn’t it? To have dedicated one’s life to a certain venture, neglecting other aspects of one’s life, only to have that venture, in the end, amount to nothing at all, the products of one’s labors ultimately forgotten?

Lincoln in the Bardo by George Saunders (2017)

So long as one is young one regards Youth as a misfortune. Only later does one discover that Youth is happiness.

Wolf Among Wolves by Hans Fallada (1937)

“You don’t really know him, that’s all.” Her voice had a tight, sinister edge to it. “He’s not who you think he is.”

I laughed uncomfortably. “So mysterious!” I said. We’d reached 321 and I turned onto the wider road in the direction of the Catawba River. “I’ll have to ask him to tell me all his deep, dark secrets.”

The Stolen Marriage by Diane Chamberlain (2017)

Riding across the countryside, I purposely turned my mind to Miss Ingram and reminded myself that this was where my affections should lie. She was beautiful, charming, accomplished in every way, an established and admired member of the neighbourhood society. Yet, I did not feel a sympathy with her in the way that I had come to feel with Jane. She did not have the power to intrigue me, as this young girl had, did not bring me the same pleasure – or pain. Still, is it ever wise to let one’s emotions rule one’s life?

There are years that pass in which nothing at all seems to happen but the change in seasons, and even those can’t be called events considering the way in which they dissolve into each other. And there are days in which entire lives turn on their axes, grinding against each other like mechanisms, crushing the things that fall between. Afterwards there are only pieces remaining and people must make of them what they will and what they can.

Favourite books read in November: The Autumn Throne and Lament for a Maker

6 thoughts on “My Commonplace Book: November 2017”