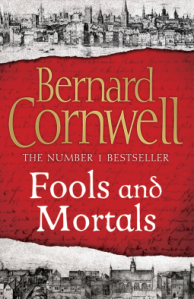 Despite my love of historical fiction, Bernard Cornwell is not an author I’ve ever really felt like reading. The usual settings and subjects that he writes about don’t appeal to me and although I did once start to read his book on Stonehenge, I didn’t get very far with it before giving up. His latest novel, Fools and Mortals, however, sounded much more like my sort of book, so I thought it was time I gave him another chance.

The title is inspired by Shakespeare’s A Midsummer Night’s Dream (“Lord, what fools these mortals be!”) and it is Shakespeare who is at the heart of the novel – not William, though, but his younger brother, Richard, who has followed him to London in the hope of becoming an actor. I found this slightly confusing, because I remembered from reading Jude Morgan’s The Secret Life of William Shakespeare that it was their other brother, Edmund, who was the actor. I don’t know why Cornwell gave this role to Richard instead; the rest of the background to the novel seems to have been thoroughly researched, so I would be interested to know whether that was a deliberate decision rather than a mistake.

Anyway, Richard Shakespeare is our narrator. The novel opens in 1595 just as The Lord Chamberlain’s Men – the acting company to which both Richard and William belong – are beginning rehearsals for A Midsummer Night’s Dream. Until now, Richard, like several of the other young men in the company, has been given only women’s parts to play. He wants nothing more than to play a man for a change, but it seems that his brother is still determined not to take him seriously as an actor. There are other companies, of course, and other theatres, and Richard receives a tempting offer from Francis Langley of the newly constructed Swan in Southwark. However, this will depend on whether or not he is prepared to steal two of William’s new plays. Will Richard betray his brother and leave The Lord Chamberlain’s Men – or can he find another way to earn William’s respect and win the bigger, better roles he believes he deserves?

I enjoyed this book much more than I’d expected to! I imagine that battle and military scenes probably form a big part of most of Cornwell’s other books, but there was nothing like that in this one, which is set entirely in the world of the Elizabethan theatre. There is still plenty of action, but it takes the form of the attempts of other companies to steal Shakespeare’s plays and the efforts of the Pursuivants to find evidence of heresy and close the playhouses down. As the narrator, Richard is involved in all the drama, both on stage and off, and tells his story in a lively, humorous style. He has his flaws but is a likeable character – although I should warn you that William is not!

The other members of The Lord Chamberlain’s Men are also brought to life, from well known figures of the period such as the comic actor Will Kemp to those who are purely fictional. It was fascinating to see A Midsummer Night’s Dream take shape starting with the earliest stages – the allocation of parts to actors and the learning of lines – to rehearsals at the home of their patron, Lord Hunsdon, and then the final performance (I loved the hilarious description of the Pyramus and Thisbe play-within-a-play). However, I couldn’t help feeling that this all became very repetitive; I felt that the entire plot of the play had been described in detail a hundred times by the time I reached the end of the novel!

The book finishes with an author’s note from Cornwell; this is long and detailed, describing his interest in Shakespeare’s work and discussing the history behind London’s playhouses. Surprisingly, he doesn’t talk about Richard Shakespeare himself or why he was chosen to be the central character in the novel.

It would be nice to think that I would find the rest of Cornwell’s books as entertaining as this one, but I’m still not sure that any of the others would really be to my taste. I do have a copy of The Last Kingdom which I acquired when it was free for Kindle a while ago, so I will try it at some point and will be happy to be proved wrong!

14 thoughts on “Fools and Mortals by Bernard Cornwell”