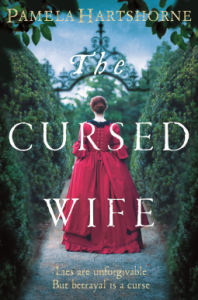 Having previously read Pamela Hartshorne’s time-slip novel The Edge of Dark, I found her latest book, The Cursed Wife, both similar and different. Similar in that they both explore the lives of women in Elizabethan England; different because this one is set entirely in the past, with no modern day storyline and no form of time travel.

The Cursed Wife is written from the perspectives of two women, Mary and Cat, who are both friends and rivals. When we first meet Mary in 1590 she appears to be leading a happy and contented life; she is married to the merchant Gabriel Thorne, and lives with him, their children and their servants in a comfortable house in London. Mary is devoted to her family and her household and has almost – but not quite – managed to forget that she was cursed as a child and predicted to die by hanging.

However, Mary’s whole life is built around lies and deception and she knows that if the truth is ever revealed she could lose everything. One rainy day she sets out to do some shopping in Sopers Lane to replenish her stocks of herbs and medicines, and is shocked to see a face from her past – a face she had expected never to see again. It’s Cat, her childhood friend, who was once as close to her as a sister, but who now possesses the secrets that could ruin Mary’s life…

As I’ve said, I found this a very different sort of book from The Edge of Dark; it doesn’t have such an eerie atmosphere and lacks the touches of the supernatural – although Mary does have a very creepy one-armed wooden doll called Peg. Instead the focus is on the relationship between Mary and Cat. It’s a relationship which changes and transforms itself over the years as the roles of the two women in each other’s lives are reversed, but the links between them are seemingly unbreakable and their stories are very closely entwined.

Cat and Mary take turns to narrate in alternating chapters and although their narrative voices are very similar, the author does use a few techniques to distinguish between the two – for example, Cat’s thoughts are often aimed directly at Mary (‘you say this’ and ‘you do that’). Cat is also a more bitter person than Mary, who can often seem quite naive and slow to understand things that are obvious to the reader. Neither woman is very likeable and although Cat is nastier, I can’t really say that my sympathies were with Mary either.

Pamela Hartshorne has written about the Elizabethan period before, not just in The Edge of Dark, but in other novels too, and she obviously knows it well. We are given lots of little details on domestic life in the late 16th century – the food people ate, the clothes they wore, the tasks carried out by servants in the home – and although historical events happening in the wider world have little direct effect on the story, there’s a sense of how precarious life could be in this period when hanging is a punishment for crime and when the most minor of illnesses can result in death. The novel also looks at the roles of women and the expectations that were placed on them regarding marriage.

The Cursed Wife is an interesting read and the storyline was compelling enough to hold my attention until the end, but I did prefer The Edge of Dark and as her earlier books all seem to be time-slip novels like that one I think I’ll have to investigate them at some point.

Thanks to Pan Macmillan for providing a copy of this book for review via NetGalley.

14 thoughts on “The Cursed Wife by Pamela Hartshorne”