It’s the first weekend of a new month which means it’s time for another Six Degrees of Separation, hosted by Kate of Books are my Favourite and Best. The idea is that Kate chooses a book to use as a starting point and then we have to link it to six other books of our choice to form a chain. A book doesn’t have to be connected to all of the others on the list – only to the one next to it in the chain.

The first book this month is Vanity Fair by William Makepeace Thackeray, for once a book that I’ve actually read! I used Vanity Fair in a previous chain a few months ago and linked it to Little Women, which has a chapter entitled “Meg Goes to Vanity Fair”. I don’t want to use the same link again, so I’ve come up with a different one this time. 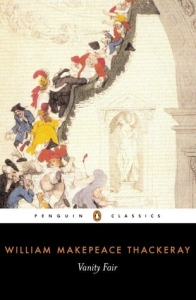 Vanity Fair is a Victorian novel published in 1848, but set in the earlier Regency period. Another novel written in the Victorian era but with an earlier setting (much earlier in this case) is George Eliot’s Romola, a long and detailed story of Renaissance Italy. I found it a challenging book to read but definitely worth the effort. 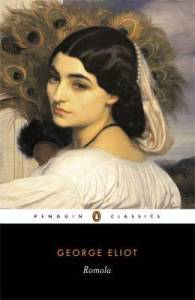 My next link is easy. I love reading about Renaissance Italy and have read a lot of novels with that setting. Like Romola, Sarah Dunant’s The Birth of Venus is set in 15th century Florence just after the death of Lorenzo de’ Medici and therefore covers some of the same historical events – although the story is very different. 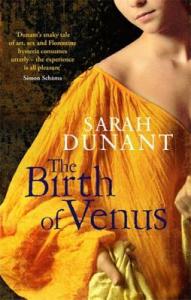 The title, The Birth of Venus, is the name of a painting by Botticelli (although that’s not what the story is about). Another novel which uses the name of a famous painting as its title is Girl with a Pearl Earring by Tracy Chevalier, set in Delft in the 1660s. 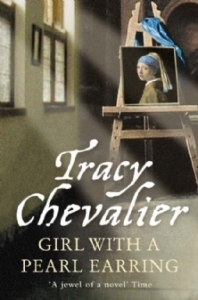 Scarlett Johansson played the title character in the film version of this book with Colin Firth as the artist Vermeer. Colin Firth has also appeared in several other adaptations of books and plays, including Oscar Wilde’s The Importance of Being Earnest in which he starred as Jack Worthing. I don’t often read plays but I loved that one so I’m going to use it as the next book in my chain. 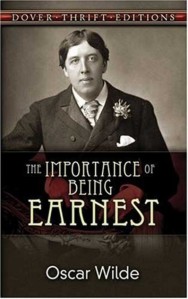 Oscar Wilde is known for his humour and The Importance of Being Earnest has a lot of great lines. I don’t always find books funny that are supposed to be funny, but one that I do think is hilarious is Three Men in a Boat by Jerome K. Jerome. I sometimes find myself reaching for it to re-read favourite scenes when I need to cheer myself up. 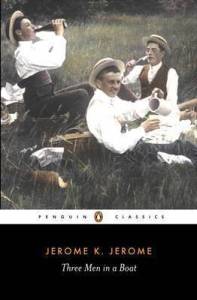 One of those favourite scenes involves Harris getting lost in the Hampton Court Maze. I love mazes and labyrinths and I’ve actually just finished a book that would have been the perfect choice to link to next. I prefer to choose books that I’ve already reviewed here on my blog, though, so instead I am linking to The Red Lily Crown by Elizabeth Loupas, which features a labyrinth in the Boboli Gardens in Florence. Florence, of course, was also the setting for the second and third books in my chain. 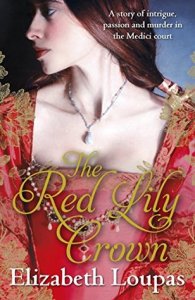 And that’s it for this month! My links have included Renaissance Italy, paintings, actors, funny books and mazes. Have you read any of my choices?

Next month we will be starting with A Christmas Carol by Charles Dickens.

29 thoughts on “Six Degrees of Separation: From Vanity Fair to The Red Lily Crown”