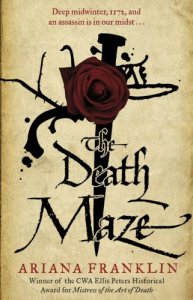 This is the second novel in Ariana Franklin’s Adelia Aguilar mystery series, set in the 12th century. My feelings about the first book – Mistress of the Art of Death – were quite mixed (I liked the medieval setting but found the dialogue and the main character too modern), but I wanted to try at least one more in the series and came across this one in the library a few weeks ago.

If you’re new to these books, I don’t think it’s necessary to have read the previous one before reading this one. The Death Maze, which has also been published under the title The Serpent’s Tale, begins with the poisoning of Rosamund Clifford, Henry II’s mistress. Henry’s estranged queen, Eleanor of Aquitaine, is immediately suspected, being the person with the most obvious motive for wanting The Fair Rosamund dead. If this is true, the repercussions could be huge and could lead the country into civil war. The king needs someone to investigate on his behalf – and so he summons Adelia Aguilar, his ‘mistress of the art of death’.

Adelia, before coming to England, had studied medicine at the famous medical school in Salerno which accepted female students as well as men. Since solving her first case for Henry II (a series of child murders which formed the basis of the previous novel), she has been living a quiet life in the countryside with her baby daughter, Allie, and it is with some reluctance that she agrees to undertake this new task. The king cannot be refused, of course, so Adelia soon finds herself setting off for Rosamund’s castle, escorted by Rowley Picot, her former lover, now the Bishop of St Albans. During their investigations, they are taken captive by Eleanor and her supporters, but when snow begins to fall the whole party become trapped for the winter at the nunnery in Godstow, where the mystery deepens as more murders take place.

In some ways, I enjoyed this book more than the first one. I thought the mystery was more complex – and certainly not as dark and disturbing as the previous one. I didn’t guess who the murderer was, although I had my suspicions, but I think we were given enough clues to work it out with no unfair surprises or information being withheld.

This is a period of history I always find interesting to read about and I felt that the portrayals of real historical figures in this book, such as Henry II and Eleanor of Aquitaine, were very different from the way they have been depicted in other novels I’ve read. Eleanor is certainly not the sympathetic, admirable character she is in Elizabeth Chadwick’s The Summer Queen trilogy, for example – she comes across as quite selfish and petulant. Most of the other characters, though, are fictional – as is most of the plot, including many of the details of Rosamund Clifford’s story. I did like the descriptions of the maze of hedges surrounding Rosamund’s tower; the scene where Adelia and her friends try to find their way through it reminded me of the famous Hampton Court Maze episode in Three Men in a Boat.

‘I’m sorry, I’m sorry,’ Adelia shouted. She faced Rowley. ‘Don’t you see, if a maze is continuous, if there aren’t any breaks, and if all the hedges are connected to each other and you follow one of them and stick rigidly to it wherever it goes, you’ll traverse it eventually, you must, it’s inevitable, only…’ Her voice diminished in misery, ‘I chose the left-hand hedge. It was the wrong one.’

As for Adelia herself, I can’t make up my mind about her. I do like her as a character because she has all the qualities I admire in a heroine – intelligence, courage and independence, as well as a passion for her career which made her turn down the chance of marriage to Rowley as she knew that would bring her medical work to an end. However, she is the sort of heroine I would expect to find in a much more modern setting; her behaviour and attitudes make her very unconvincing as a medieval woman. I could say the same about the language Ariana Franklin uses, which I think also often feels far too modern for the time period. I suppose whether or not you will enjoy these books depends on how important those things are to you, but I always struggle to overlook them.

I’m not sure if I will read any more of the Adelia Aguilar books, but I might try one of Ariana Franklin’s earlier novels published under her real name, Diana Norman.

14 thoughts on “The Death Maze by Ariana Franklin”