Following last month’s announcement of the 2019 longlist for the Walter Scott Prize for Historical Fiction, the shortlist was revealed yesterday. As you probably know by now, I am currently working my way through all of the shortlisted titles for this prize since it began in 2010 (you can see my progress here). There are six books on this year’s list and here they are:

A Long Way From Home by Peter Carey 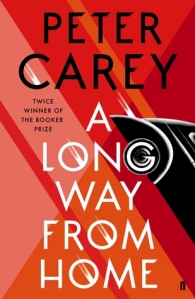 Irene Bobs loves fast driving. Her husband is the best car salesman in rural south eastern Australia. Together with Willie, their lanky navigator, they embark upon the Redex Trial, a brutal race around the continent, over roads no car will ever quite survive.

A Long Way from Home is Peter Carey’s late style masterpiece; a thrilling high speed story that starts in one way, then takes you to another place altogether. Set in the 1950s in the embers of the British Empire, painting a picture of Queen and subject, black, white and those in-between, this brilliantly vivid novel illustrates how the possession of an ancient culture spirals through history – and the love made and hurt caused along the way.

After The Party by Cressida Connolly

It is the summer of 1938 and Phyllis Forrester has returned to England after years abroad. Moving into her sister’s grand country house, she soon finds herself entangled in a new world of idealistic beliefs and seemingly innocent friendships. Fevered talk of another war infiltrates their small, privileged circle, giving way to a thrilling solution: a great and charismatic leader, who will restore England to its former glory.

At a party hosted by her new friends, Phyllis lets down her guard for a single moment, with devastating consequences. Years later, Phyllis, alone and embittered, recounts the dramatic events which led to her imprisonment and changed the course of her life forever.

The Western Wind by Samantha Harvey (See my review here)

15th century Oakham, in Somerset; a tiny village cut off by a big river with no bridge. When a man is swept away by the river in the early hours of Shrove Saturday, an explanation has to be found: accident, suicide or murder? The village priest, John Reve, is privy to many secrets in his role as confessor. But will he be able to unravel what happened to the victim, Thomas Newman, the wealthiest, most capable and industrious man in the village? And what will happen if he can’t?

Moving back in time towards the moment of Thomas Newman’s death, the story is related by Reve – an extraordinary creation, a patient shepherd to his wayward flock, and a man with secrets of his own to keep. Through his eyes, and his indelible voice, Harvey creates a medieval world entirely tangible in its immediacy.

One rain-swept February night in 1809, an unconscious man is carried into a house in Somerset. He is Captain John Lacroix, home from Britain’s disastrous campaign against Napoleon’s forces in Spain.

Gradually Lacroix recovers his health, but not his peace of mind – he cannot talk about the war or face the memory of what happened in a village on the gruelling retreat to Corunna. After the command comes to return to his regiment, he sets out instead for the Hebrides, with the vague intent of reviving his musical interests and collecting local folksongs. Lacroix sails north incognito, unaware that he has far worse to fear than being dragged back to the army: a vicious English corporal and a Spanish officer are on his trail, with orders to kill. The haven he finds on a remote island with a family of free-thinkers and the sister he falls for are not safe, at all.

In a narrative as mysterious as memory itself – at once both shadowed and luminous – Warlight is a vivid, thrilling novel of violence and love, intrigue and desire. It is 1945, and London is still reeling from the Blitz and years of war. 14-year-old Nathaniel and his sister, Rachel, are apparently abandoned by their parents, left in the care of an enigmatic figure named The Moth. They suspect he might be a criminal, and grow both more convinced and less concerned as they get to know his eccentric crew of friends: men and women with a shared history, all of whom seem determined now to protect, and educate (in rather unusual ways) Rachel and Nathaniel. But are they really what and who they claim to be? A dozen years later, Nathaniel begins to uncover all he didn’t know or understand in that time, and it is this journey – through reality, recollection, and imagination – that is told in this magnificent novel.

The Long Take by Robin Robertson

Walker, a young Canadian recently demobilised after war and his active service in the Normandy landings and subsequent European operations. Suffering from post-traumatic stress disorder, and unable to face a return to his family home in rural Nova Scotia, he goes in search of freedom, change, anonymity and repair. We follow Walker through a sequence of poems as he moves through post-war American cities of New York, Los Angles and San Francisco.

What do you think?

I’m pleased I’ve already read two of the books from this year’s shortlist – it gives me a chance of actually reading the other four before the winner is announced in June. I enjoyed the Andrew Miller and would be happy to see it win and although The Western Wind wasn’t really my sort of book I think it will be a strong contender too. I’m looking forward to reading Warlight but I’m not sure about the other three, especially The Long Take which is written in verse. I’m a bit nervous about reading that one!

Have you read any of these books? Which one do you think deserves to win the prize?