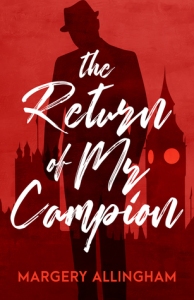 This collection of thirteen short stories by Margery Allingham was originally published in 1989 and has been reissued by Agora Books this month. The title is maybe slightly misleading as Allingham’s famous detective Albert Campion only appears in half of the stories, but I actually found that some of the non-Campion stories were amongst my favourites from the collection.

Of the stories featuring Campion, I thought the best were The Black Tent, in which Albert catches a girl stealing a package from a desk during a party and The Case is Altered, where he stumbles upon a case of espionage while spending Christmas with friends. I was less impressed with the other Campion stories in the book, but I thought these two were just the right length, were well plotted and had satisfying conclusions. There’s also an essay, My Friend Mr Campion, where Allingham describes how she created the character of Albert Campion (or rather, how he created himself) and later in the book, in What to Do with an Ageing Detective, she imagines herself coming face to face with an elderly Campion and his servant Magersfontein Lugg. I found the first of these pieces interesting, but I think the second is really just for true Campion fans – which I can’t say that I am yet, having so far only read one full-length novel (Mystery Mile) and a few short stories.

The rest of the stories – the ones which don’t involve Campion and are not necessarily mysteries either – cover a mixture of subjects and genres. I loved Sweet and Low, in which two women who have nothing in common apart from a love of horse riding compete for the attentions of the same man. The horse called ‘Sweet and Low’ has a personality of his own and is the real star of the show in this one! The Wind Glass, about a young girl who rejects a marriage proposal from a Japanese man and receives a rather sinister gift in return, is another one that stood out due to the genuinely eerie atmosphere Allingham creates, although it was difficult to ignore the overt racism which did unfortunately spoil that particular story for me. On a more light-hearted note, I think The Kernel of Truth also deserves a mention. A man prepares a recipe for punch and adds one very special ingredient – but his wife won’t be very pleased if she finds out what it is. This is an entertaining little story that you won’t fully appreciate until you read the final paragraph!

Considering that I’m not usually a lover of the short story format, I enjoyed almost all of the tales in this collection, with only one or two exceptions. I’ll have to try more of the full-length Albert Campion mysteries soon!

11 thoughts on “The Return of Mr Campion by Margery Allingham”