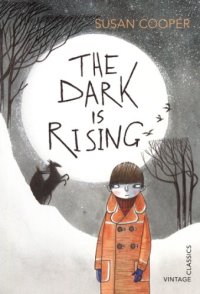 Since reading Susan Cooper’s Over Sea, Under Stone earlier this year, I have been looking forward to reading the rest of her The Dark is Rising sequence, especially after I was told that Over Sea, Under Stone is usually considered the weakest of the six books. The second book, The Dark is Rising, sounded appropriately dark, so I decided to read it for this year’s R.I.P event. The first thing to say is that although Over Sea, Under Stone was the first to be published, I don’t think it’s essential to read it before starting this one. They are linked by the character of Merriman Lyon and the same overarching theme, but otherwise they are quite separate stories.

The Dark is Rising, published in 1973, is set in the fictional English village of Huntercombe during the Christmas period. The novel opens with Will Stanton celebrating his eleventh birthday on Midwinter Day – 21st December – and wishing it would snow. He gets his wish because snow does soon begin to fall…and keeps on falling, covering the landscape in a thick blanket of white as far as the eye can see. Stepping outside into a world transformed by snow, Will quickly discovers that it has been transformed in other ways as well – the houses and roads of his own time have disappeared, to be replaced by the dense forest of an earlier age.

As Will begins to explore this strange, enchanted land, he learns for the first time that he is one of the Old Ones, destined to join the people of the Light in their ongoing battle against the forces of the Dark. With the help of Merriman Lyon and the mysterious Lady, Will must look for the six Signs of the Light and only when he has collected all six will he be able to ward off the powers of the Dark.

The Dark is Rising is described as a children’s classic, but even reading it as an adult I found it genuinely creepy in places. The villains, particularly the sinister cloaked Rider, are quite menacing and the way the snow keeps falling, day after day – too heavy and too persistent to be natural – adds to the general eeriness. For any tale of the conflict between good and evil to be effective, the evil needs to feel really evil and that is certainly the case here. But although the Light is obviously the ‘good’ side, Will discovers over the course of his quest that sometimes it is necessary to make sacrifices and difficult choices – and that sometimes innocent people will be made to suffer in furthering the cause of the Light.

Will himself could have been a fascinating character – an intriguing mixture of ordinary eleven-year-old boy and wise and powerful Old One – but I didn’t find him as interesting as I would have liked. This is maybe because his quest just seems a little bit too easy – he is led straight to most of the six Signs without really needing to search for them – and so he comes across as somebody to whom things happen rather than somebody who actively makes them happen. I also wondered at first why Susan Cooper had given him so many brothers and sisters (he is the youngest of nine children and I found the number of characters introduced in the opening chapters a bit overwhelming), but the significance of that soon becomes clear.

There are some elements of English folklore incorporated into the plot, such as the legend of Herne the Hunter, and Christmas traditions and customs play a big part in the story too: giving and receiving presents, decorating the tree, singing carols. While this book was a perfect choice for the R.I.P. challenge, I wish I had saved it until December as it would have been a perfect Christmas read. Anyway, I enjoyed it and am looking forward to reading the other books in the series.

28 thoughts on “The Dark is Rising by Susan Cooper”