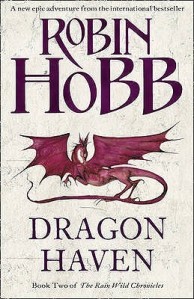 This is the second book in Robin Hobb’s Rain Wild Chronicles series, part of a larger sequence of fantasy novels set in a world known as the Realm of the Elderlings. I have been reading through the sequence in order of publication, beginning with the Farseer Trilogy and then moving on to the Liveship Traders Trilogy and the Tawny Man Trilogy. I started the Rain Wild Chronicles (a quartet rather than a trilogy) earlier this year and so far, after loving all of those previous series, I am quite disappointed with this one. In comparison with the others, I think these books feel less mature and less emotionally powerful, and although they are good enough for me to want to persevere and read all four, I am looking forward to being finished with them so I can start the final trilogy, Fitz and the Fool.

This second Rain Wild novel picks up the story exactly where the previous one ended, which is not surprising as I’m sure I read somewhere that they were originally supposed to be two halves of one long book. At the end of Dragon Keeper, we left our group of dragons and their keepers making the long and difficult journey up the Rain Wild River in search of Kelsingra, the legendary Elderling city now lost in the mists of time. In Dragon Haven the journey continues, with our characters facing a new set of trials and challenges. Who will survive and who will not? Will the dragons ever grow strong enough to fend for themselves? And will they ever find Kelsingra?

To start with the positives, I found myself enjoying the storyline following Sedric and the little copper dragon, Relpda. This surprised me because, based on the first book, Sedric was not a character I had imagined ever liking, but he undergoes a transformation in this book, largely due to the bond he forms with Relpda. And he is not the only one who changes as a result of spending time with the dragons. Without wanting to spoil too much for anyone who hasn’t got this far in the series yet, we learn a lot in this book about the connections between dragons and Elderlings – and are introduced to the intriguing idea that if dragons are coming back into the world, why not Elderlings too? I also enjoyed seeing Leftrin’s liveship, Tarman, take on more personality of his own.

Mainly, though, this book is concerned with the romantic relationships between the various characters and I have to admit, none of this interested me very much, particularly where the teenage dragon keepers were concerned. I didn’t really care whether Jerd was sleeping with Greft and whether Thymara would choose Tats or Rapskal or resist being forced to choose at all. And although I was pleased with the way Alise’s story played out, I found it quite predictable which meant I didn’t become as emotionally invested as I would have liked.

The book does end on a bit of a cliffhanger which has left me feeling more enthusiastic about reading the third book, City of Dragons. I’m hoping it will concentrate more on the dragons, Elderlings and Kelsingra rather than on trying to pair off every character regardless of whether it feels necessary or natural. I will also be interested to see, when I finally move on to Fitz and the Fool, whether I’ll be glad I read the Rain Wild novels or whether I could have missed them out.