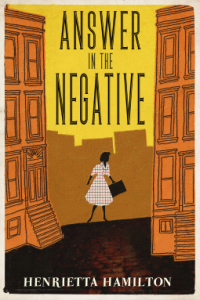 It’s good to see so many forgotten authors of crime fiction being brought back into print by various publishers recently. Henrietta Hamilton is another one I had never heard of until I came across Answer in the Negative, originally published in 1959 and now available as part of Agora Books’ Uncrowned Queens of Crime series.

Set in the world of 1950s journalism, the novel follows husband and wife detective team Johnny and Sally Heldar, who are called in by their friend, Toby Lorn, to investigate a case of poison pen letters and practical jokes. Toby runs a newspaper cuttings agency in London’s Fleet Street, providing archived photographs to writers and publishers, and it is one of his assistants, Frank Morningside, who is the target of the nasty letters. Johnny and Sally quickly discover that there is no shortage of suspects as Morningside is disliked by so many of the other archive workers, but before they have time to identify the culprit, Morningside is found dead in the doorway of his office, having been hit on the head by a box of heavy glass negatives. Suddenly the Heldars find themselves investigating a murder case, but can they stop the murderer before he or she kills again?

Answer in the Negative is a short book and kept me entertained for a day or two, but it’s not one of the better ‘forgotten crime novels’ I’ve been reading lately. It got off to a promising start, but quickly became bogged down with repetitive discussions of alibis and lists of who was where at what time. I know other readers enjoy that sort of mystery more than I do, so it’s really just a matter of personal taste. The characterisation didn’t seem very strong either, which is a problem in a book where so many characters are introduced in a short space of time. Johnny and Sally themselves are likeable enough but they are no Tommy and Tuppence and I found the dialogue between them quite wooden. Their partnership is not a very equal one and it’s quite clear that Johnny is regarded as the detective and Sally as just his helper, but I was pleased to see that she does occasionally go off and have adventures of her own – even if Johnny isn’t very happy about it!

I did find the setting interesting and enjoyed the little insights we are given into 1950s life; it was particularly fascinating to see what was involved in archiving and the use of photographs in books and newspapers in an era before computers and digital images made everything available at our fingertips. For some reason, though, the constant references to ‘pix’ and ‘negs’ really irritated me! I know it’s realistic that the characters would have used that terminology for pictures and negatives, but it was so grating. Again, not something that will bother everyone, of course.

I don’t think Henrietta Hamilton is an author I would want to read again, but other reviews of this book are more positive than mine so I hope Agora will continue to publish her other titles for those who are enjoying them.

6 thoughts on “Answer in the Negative by Henrietta Hamilton”