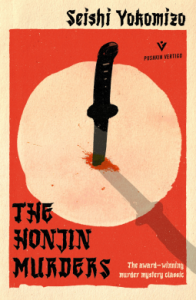 A three-fingered man. A room painted all in red. The eerie music of a Japanese koto. A katana – a sword – standing blade-first in the snow. These all form part of this classic murder mystery, originally published in Japanese in 1946 and now available from Pushkin Press in an English translation by Louise Heal Kawai.

The Honjin Murders is set in November 1937 in the village of Okamura, home to the Ichiyanagi family, whose ancestors once ran a honjin – an inn where noble travellers would stay during the Edo period. Those times are long gone, but the Ichiyanagis are still proud of their illustrious lineage. At the beginning of the novel, the various members of the family are gathering for the wedding of the eldest son and heir, Kenzo, to a young schoolteacher, Katsuko. Kenzo’s family are not very happy about the bride’s humble origins, but the marriage goes ahead and everyone retires to bed for the night. A few hours later, screams are heard from the newlyweds’ room and the pair are found inside stabbed to death.

With the doors locked and no fresh footprints in the snow surrounding the building, it seems that the perfect locked room murder has been committed. Luckily, Katsuko’s uncle Ginzo knows just the man who will be able to solve it: his friend, the private detective Kosuke Kindaichi. Ginzo sends for Kindaichi who arrives in the village looking dishevelled, unassuming and unimpressive (it’s difficult not to make comparisons with that other famously untidy detective, Columbo, although this book was published decades earlier) but appearances can be deceptive and it quickly becomes clear that Kindaichi has the sort of sharp mind and powers of deduction that are necessary to solve such a complex crime.

I won’t say any more about the plot of the novel or the mystery itself. I didn’t work out how the murder was committed or who the culprit was and I was happy just to watch the solution unfold – although like another Japanese mystery novel I read last year, Murder in the Crooked House by Soji Shimada, I felt that there seemed to be more focus on puzzle solving and providing an ingenious technical explanation for the crime rather than on character and motivation. Maybe that is a common feature of Japanese crime fiction; I haven’t read enough of it yet to know.

What I particularly loved about this book was the style in which it was written, with the narrator (presumably meant to be Yokomizo himself) speaking directly to the reader and breaking off from the story now and then to discuss other classic mystery novels, especially of the locked room variety, and their similarities to the Honjin case:

The first that came to mind were Gaston Leroux’s The Mystery of the Yellow Room and Maurice Leblanc’s The Teeth of the Tiger; then there’s The Canary Murder Case and The Kennel Murder Case, both by S.S. Van Dine; and finally, Dickson Carr’s The Plague Court Murders…But this real-life case wasn’t quite like any of the above-mentioned. Maybe, just maybe, the killer had read a selection of stories like these, dissected all of the different devices used, then picked out the elements that he needed, constructing his own device. At least that’s one theory.

Yokomizo may have drawn inspiration from some of those earlier mysteries, but The Honjin Murders itself feels original and different, as well as being a very clever and entertaining novel. Although I hadn’t heard of Kosuke Kindaichi until I read this book, it seems that he appears in over seventy novels (one of which, The Inugami Curse, is also available in English from Pushkin Press). I will look forward to meeting him again!

17 thoughts on “The Honjin Murders by Seishi Yokomizo”