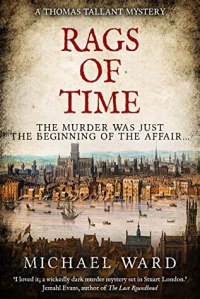 I love a good historical mystery, so I’m pleased to have had the opportunity to read Rags of Time, the first in a new series set in the 17th century during the final years of the reign of Charles I. Based on how much I enjoyed this book, I will certainly be looking out for the next one.

The story begins in 1639 with Tom Tallant, a young spice merchant, returning to London from India only to find that he has become implicated in a murder investigation. Wool merchant Sir Joseph Venell has been found dead in a meadow near his home in Kensington and it seems that Tom is the main suspect. Then another murder takes place, this time in the Tallant household, casting further suspicion on Tom. In order to clear his name, Tom must try to identify the real murderer – and for that he will need the help of Elizabeth Seymour, an intelligent and unusual young woman with an interest in astronomy and an addiction to gambling.

“The murder was just the beginning of the affair”, it says on the front cover of the book, and that is quite true because although Rags of Time at first appears to be a straightforward murder mystery, it soon becomes apparent that the murder is only one aspect of the story and for a while takes second place to an equally fascinating subplot involving a printing press and the distribution of seditious pamphlets. Remember that this is all taking place during an eventful and turbulent period of history, a time of tension between King and Parliament and unrest on the streets:

‘Each day and week we suffer treasonable talk on the street, attacks on our churches, seditious street-preachers, scandalous pamphlets on every corner and finally this…mutinous gangs of Apprentice Boys!’

I loved the recreation of 17th century London; there’s such a strong sense of time and place (without becoming overly descriptive) and with so much going on it’s the perfect backdrop for Tom’s adventures. Yet one of my favourite parts of the story relates to something taking place overseas – the ‘tulip mania’ sweeping Amsterdam in the 1630s and the notion of windhandel, or ‘trading in promises’.

As for the mystery itself, once everything starts to come together towards the end of the book, there are plenty of twists and turns and when the solution was revealed I was completely taken by surprise! I think there were probably a few clues but I didn’t pick up on them and didn’t guess either the culprit or how and why the murders were carried out. Although most of the focus of the novel is on Tom, I was pleased to see that Elizabeth also contributes to the solving of the mystery; I wasn’t sure I would like her at first and it took me a little while to warm to her, but I think she’s a character with a lot of potential, as is Tom himself. I hope to meet them both again soon!

Thanks to the author for providing a copy of this book for review.

7 thoughts on “Rags of Time by Michael Ward”