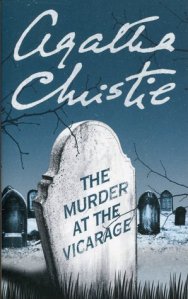 This month’s theme for Read Christie 2021 is ‘a story starring a vicar’ and the chosen title is an obvious one – The Murder at the Vicarage, which was first published in 1930 and is the first book in the Miss Marple series. I have read most of the later Marple novels, but never this one and I thought it would be interesting to go back to the beginning and read the book that introduced Miss Marple to the world of crime fiction.

The novel is set, like many of the other Marple novels, in the village of St Mary Mead, a place where everyone knows everyone else and nobody’s behaviour goes unnoticed! When Colonel Protheroe is found dead in the study at the vicarage, shot while waiting for the vicar to return home, Miss Marple and the other villagers immediately begin to gossip and to speculate on who the murderer could be. At first suspicion falls upon Anne Protheroe, the Colonel’s unhappy wife, and Lawrence Redding, the man with whom she has been having an affair. However, Colonel Protheroe was not a popular man and there is no shortage of other suspects – Miss Marple herself insists that she can think of at least seven.

The story is narrated by the vicar, Leonard Clement, who is drawn into the mystery not only due to the murder victim being found in his study, but also because the people of St Mary Mead see him as a trusted friend in whom they can confide and share pieces of information they prefer not to give to the police. The vicar’s narrative is both intelligent and amusing, as he reflects on his household, his domestic arrangements and his relationship with his younger wife, Griselda, as well as carrying out his own investigations into the murder case.

Someone else who is investigating the murder for herself is Miss Marple – and of course she finds her way to the solution before the police do, using her knowledge of human nature and her powers of observation. Miss Marple as she appears in this first novel is slightly different from the woman we meet in the later books in the series and is not particularly well liked by her neighbours, who see her as someone who goes around poking her nose into everyone else’s business. Unlike in some of the other books, where she seems to have been added to the story almost as an afterthought and the plot would have worked just as well without her, in this one she is there from beginning to end – often just in the background, but everything she says and does and every suggestion she makes turns out to be vital to the solving of the mystery!

Although I did enjoy this book, particularly as I found it such a difficult one to solve – I think I suspected almost everyone and allowed myself to get distracted by all the red herrings Christie throws into the plot – it took me a while to get into it. There were so many characters to keep track of and apart from the vicar and his wife and Miss Marple I didn’t really engage with any of them. I found the second half of the book much more compelling, though, as the plot became more and more complex and clever. I have read three Miss Marple mysteries in a row now for the Read Christie challenge, so I’m in the mood for something different next month. The August theme is ‘a story set by the seaside’ and I’m thinking about the Poirot novel Evil Under the Sun.

16 thoughts on “The Murder at the Vicarage by Agatha Christie”