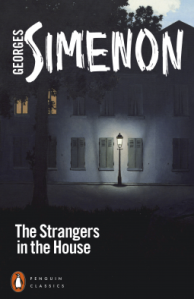 Since enjoying my first Georges Simenon book, The Man from London, last year, I’ve been looking forward to reading more. I had intended to try one of his Maigret books next, but the opportunity to read this one came up first; it’s a new Penguin Classics edition of a novel originally published in 1940, The Strangers in the House, and is translated by Howard Curtis. Unfortunately, at 224 pages in the paperback version, it’s just slightly too long to count towards Novellas in November!

The Strangers in the House is one of the many standalone novels written by Simenon that are described as romans dur, or ‘hard novels’. I’m not entirely sure what that term means, but as far as I can tell, it refers to the dark, noirish atmosphere, and the hard, bleak lives that the characters are leading. And the life of our protagonist, Hector Loursat, is certainly bleak! Once a successful lawyer, he fell into a depression when his wife left him eighteen years earlier and turned to alcohol for comfort. Since then, he has spent his time sitting alone with his books and a constant supply of red wine, living in the same house as his daughter Nicole, but barely aware of her presence.

Loursat’s miserable, solitary existence continues until, one night, he hears a gun being fired inside the house and discovers a dead body in one of the bedrooms. When Nicole and her friends become implicated in the murder investigation, Loursat is forced to acknowledge that his daughter is now a stranger to him…or is it in fact Loursat himself who is the stranger in the house?

There’s a detective fiction element to this novel, as Loursat sets out to uncover the truth behind the murder. When suspicion falls on Nicole’s lover, he agrees to defend the young man in court and finds that getting involved in the legal profession again gives him some purpose in life. However, although we see Loursat speaking to the suspects, getting to know Nicole’s circle of friends and learning all he can about the victim, this is not a conventional mystery novel and not one that the reader has much chance of being able to solve. If you’re expecting a story with clever twists and surprises you’ll be disappointed; even the court scenes which take up about half of the book lack suspense.

The book is much more successful as a psychological study of a lonely, reclusive man who is forced to confront his own behaviour and gradually engage with the people and things he has neglected for years. Watching Loursat’s reawakening as he becomes aware of the things that have been going on in his own house without his knowledge is fascinating. Whether or not he finds redemption and whether it’s too late to repair the damage to his relationship with Nicole I will leave you to discover for yourself, if you read the book. All I will say is that Simenon’s storytelling is realistic, unsentimental and ‘hard’.

Have you read this or any of Georges Simenon’s other books? Which can you recommend?

Thanks to Penguin Classics for providing a copy of this book for review via NetGalley.

10 thoughts on “The Strangers in the House by Georges Simenon”