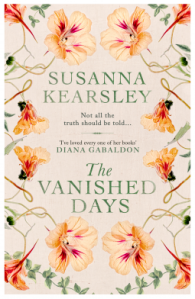 The Vanished Days, Susanna Kearsley’s latest book, is a prequel to The Winter Sea, which happens to be one of the few Kearsley novels I haven’t read yet! However, it didn’t matter at all as this is a completely separate story and works perfectly as a standalone.

The novel opens in 1707, the year of the Act of Union between Scotland and England. A few years earlier, Scotland had been involved in the unsuccessful Darien Scheme – an attempt to establish a colony on the Isthmus of Panama – and as part of the union settlement, England will pay compensation to those who had lost money due to the failed venture. When a young widow, Lily Aitcheson, comes forward to claim the wages owed to her husband Jamie Graeme, who was killed during the Darien expedition, Sergeant Adam Williamson is asked to investigate her claim. There is some doubt as to whether Lily and the man she insists was her husband were really married – and unless she can prove that their marriage was valid, she won’t be entitled to the money.

As Adam begins his investigation, searching for witnesses to the wedding or anyone who can say that it ever took place, he finds himself becoming more and more attracted to Lily. And, in chapters which alternate with the 1707 ones, we go back to 1683 and follow Lily through her childhood and the sequence of events that lead to her arriving in Edinburgh and claiming to be the widow of Jamie Graeme. Unlike most of Kearsley’s novels, which either involve some form of time travel or are set in two completely different time periods, one contemporary and one historical, this book is entirely historical, with the two threads of the story set just a few decades apart. There are none of the other supernatural elements that often appear in her novels either, so this one has a slightly different feel.

It was interesting to read about an aspect of Scottish history that doesn’t seem to get a lot of attention in fiction. Although I was aware of the Darien Scheme and some of the events leading to the Act of Union, I’m not sure if any of the historical novels I’ve read have actually covered this subject. Some real historical figures appear in The Vanished Days too and Kearsley explores some of the political and religious tensions building in Scotland during this time – a reminder that the Jacobite rebellions are on the horizon. The focus, though, is on Lily’s personal story, whether seen through her own eyes or those of Adam and the people he interviews who once knew her.

This is quite a long book and I found it a bit slow for a while in the middle, but I was rewarded by a great ending with an unexpected twist. It was something I hadn’t seen coming at all and the sort of thing that makes you want to read the whole book again to see if there were any clues. I won’t do that just yet, but I will definitely try to read The Winter Sea soon, along with the other two Kearsley novels I still haven’t read, The Shadowy Horses and Bellewether.

Thanks to Simon & Schuster UK for providing a copy of this book for review via NetGalley.

This is book 20/50 read for the Historical Fiction Reading Challenge 2022.

24 thoughts on “The Vanished Days by Susanna Kearsley”