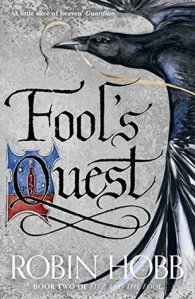 Although I don’t read a lot of fantasy, I do love Robin Hobb’s books and would count her as one of my favourite authors. I’ve now read fifteen of her novels, all from the various trilogies and quartets that make up the larger sequence known as the Realm of the Elderlings. After this book, I’ll only have one more to read and then I’ll be finished.

Fool’s Quest is the second book in the final trilogy, Fitz and the Fool. If you’re new to Hobb, I think it’s quite obvious that you won’t want to start here – and I certainly wouldn’t recommend it! Begin with Assassin’s Apprentice instead and then continue from there. There may be spoilers in the rest of this post that you would prefer to avoid, so keep reading at your own risk!

Anyway, Fool’s Quest opens with FitzChivalry Farseer back at Buckkeep Castle, helping to heal the Fool, having unintentionally stabbed his old friend at the end of the previous book, Fool’s Assassin. Unknown to Fitz, in his absence a group of mysterious and menacing strangers have attacked his country estate of Withywoods and abducted his young daughter, Bee. It will be a while before Fitz receives this devastating news, but meanwhile another momentous event takes place in his life – something which I had been hoping would happen for a very long time!

The story moves forward at a very slow pace while we’re waiting for Fitz to discover what has happened to Bee – and even once he becomes aware, he still doesn’t set off in pursuit immediately but waits until he has gathered more information and made his preparations. This is a change from the more impetuous young Fitz we knew in the earlier books (and slightly frustrating for the reader) but at the same time, the slow pace didn’t bother me and I was never bored. While Fitz is at Buckkeep, Hobb continues to develop his relationships with long-standing characters such as Chade, Kettricken, Dutiful and Nettle, as well as introducing some new ones, including Chade’s latest apprentice assassin, Spark, and Motley the talking crow! We don’t hear as much from Bee herself as we did in the previous book – only a few chapters are written from her perspective, but what we do hear gives us an idea of the nature of her abductors and the plans they have for her.

Later in the novel, strong connections with the other trilogies and quartets in the sequence begin to emerge and I understood why other Hobb readers had recommended not skipping the Liveship Traders and Rain Wild Chronicles books. I was so glad that I’d read all of those books; not only do they add to an understanding of the world Hobb has created (particularly the role of dragons), but being reacquainted with characters like Malta and Reyn Khuprus or Rapskal the dragon keeper would have meant nothing to me. And as well as the appearances from the Liveship and Rain Wild characters, I was delighted to see Fitz reconnect with a long-departed character from the earlier Farseer novels.

By the end of the book, Fitz and the Fool are on their way to far-off Clerres in search of Bee and her captors and although I’m sure Robin Hobb could have brought us to this point in half the number of pages, I enjoyed every minute of this slowly-unfolding story. Once I’ve finished my 20 Books of Summer reading I’m looking forward to moving on to Assassin’s Fate and finding out what Hobb has in store next for Fitz and his friends. 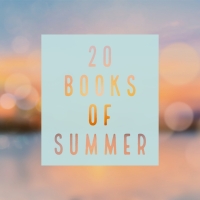