This month we’re starting with the book that finished last month’s chain! This will be different for everyone, but in my case it’s Elizabeth and Her German Garden by Elizabeth von Arnim.

Published in 1898, the book has an autobiographical feel and is written in the form of a diary in which the narrator, Elizabeth, takes us through a year in her life, describing her love for the garden of her home in northern Germany and the changes she sees as the seasons go by. 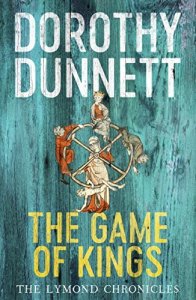 There were so many different options I could have chosen for my first link – diaries, Germany, the name Elizabeth – but while I was trying to decide I came across this quote from Sleeping Murder by Agatha Christie (1):

Gardening was her passion. Her favourite literature was bulb catalogues and her conversation dealt with primulas, bulbs, flowering shrubs and alpine novelties.

The character being described here is Dolly Bantry. It sounds as though she would get along well with Elizabeth! Dolly Bantry appears in several of Christie’s other Miss Marple novels, including The Body in the Library and The Mirror Crack’d From Side to Side, but only has a small part to play in Sleeping Murder, which is one of my favourite Marples. I love the eerie atmosphere Christie creates in this book.

Next, I’m linking to another book with a sleepy title: Before I Go to Sleep by SJ Watson (2), a psychological thriller in which a woman wakes every morning to find she has lost her memory and doesn’t recognise the man who says he is her husband. This wasn’t really my usual sort of read but I found it completely gripping, as well as very unsettling – poor Christine was in such a frightening and vulnerable position.

Near the beginning of The Game of Kings by Dorothy Dunnett (3) a character is suffering from amnesia, but is he genuine or is he pretending? As with so many things in Dunnett’s Lymond Chronicles, we can’t be sure. In fact, we aren’t even told the character’s name in this scene and have to work out for ourselves who he is. Set in 16th century Scotland, this is one of my favourite books (and series); it can be challenging for a first-time reader, but so rewarding when you reach a certain point where everything – sort of – begins to make sense!

Chess is often described as ‘the game of kings’ and all six of the Lymond Chronicles have titles that refer to chess pieces or moves. Another book with a chess-related title is Queen’s Gambit by Elizabeth Fremantle (4) – not to be confused with the recent Netflix series, which is something completely different! This Queen’s Gambit is the story of Katherine Parr, Henry VIII’s sixth and final wife. Katherine may not have had such a dramatic life as some of the other queens, but I find her the most likeable and I enjoyed this book.

Elizabeth Fremantle’s last few books have been published under the name E.C. Fremantle. An author who went from using her initials to using her full name is SJ Bolton, now publishing as Sharon Bolton. I love her books, particularly her Lacey Flint series and her early standalones, which have stronger Gothic elements than her later ones. The first of these I read was Sacrifice (5), a dark and mysterious murder mystery set in Shetland. I really enjoyed the way Bolton incorporated Norse myths and legends into the plot.

From Shetland to another Scottish island for my final link. Stormy Petrel by Mary Stewart (6) is set in the Hebrides on the island of Moila, which I believe is fictional but so vividly described I’m sure she must have based it on a real place. Published in 1991, this was one of Stewart’s final novels and like her other later books (Rose Cottage and Thornyhold) it has a gentler feel than her earlier, more suspenseful ones.

And that’s my chain for this month! My links have included gardens, sleeping, amnesia, chess-related titles, authors using their initials and Scottish islands. In October we’ll be starting with Notes on a Scandal by Zoë Heller.

22 thoughts on “Six Degrees of Separation: From Elizabeth and Her German Garden to Stormy Petrel”