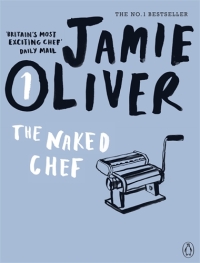 This month, we’re starting with The Naked Chef by Jamie Oliver.

The Naked Chef teaches you how to make beautiful dishes from scratch, whether you’re cooking for guests or simply enjoying good food with your family. Host a dinner party your friends won’t forget with light Vegetable Tempura, followed by melt-in-the-mouth spiced Slow-Cooked Lamb Shank. Or why not try the Chilli, Tomato, Oregano and Pancetta Pizza; perfect for getting the family stuck in.

This book has something for everyone – from those who want great food but want to keep it simple, to those who work for a living and don’t have time to spend all evening cooking. The Naked Chef is all about giving people confidence and getting them to feel at ease in the kitchen, with the help of Jamie Oliver, even if they have never tried cooking before!

I don’t own this book and am not likely to, particularly as I’m a vegetarian (I know he has written another one, Veg), but I thought it was an interesting starting point for this month’s chain. 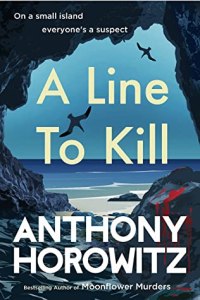 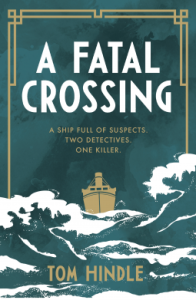 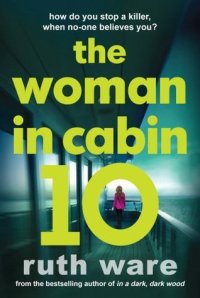 When I saw that we were going to be starting with the Jamie Oliver book, I thought immediately of a novel I read just this summer that features a celebrity chef: A Line to Kill by Anthony Horowitz (1), the third in the Hawthorne and Horowitz mystery series, in which the author uses himself as one of the protagonists. This book revolves around a murder during a literary festival on the island of Alderney and the chef character – Marc Bellamy – is one of the suspects. Horowitz is attending the festival with the detective Daniel Hawthorne and the two reluctantly team up again to investigate the murder.

Daniel Hawthorne and Anthony Horowitz have had a difficult and uncomfortable working relationship throughout the series. The relationship between the narrator and the detective in A Fatal Crossing by Tom Hindle (2) – a murder mystery set on board a cruise ship in the 1920s – struck me as very similar, with the detective, James Temple, being a bad-tempered and hostile man who resents the attempts of the bumbling ship’s officer Timothy Birch to help him solve the crime. This was Tom Hindle’s first novel and I really enjoyed it; I’m looking forward to reading his new one, The Murder Game, which is out in February.

The Woman in Cabin 10 by Ruth Ware (3) is another crime novel set on a ship. A journalist, Lo Blacklock, goes on a cruise around the Norwegian fjords to see the Northern Lights and is convinced that someone has fallen overboard when she hears a scream and a splash from the next cabin, Cabin 10. When the cabin door is opened the room is empty with no sign that anyone had ever been staying there – yet Lo had met the woman in Cabin 10 earlier that very evening. I found this book quite enjoyable, but too drawn out towards the end. 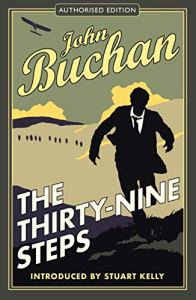 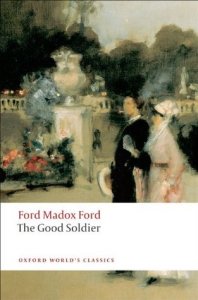 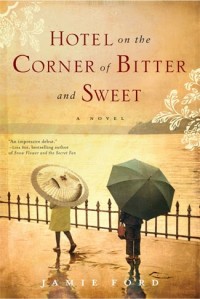 There are lots of books with numbers in their titles, but the one I’m linking to here is John Buchan’s The Thirty-Nine Steps (4). In this classic adventure/espionage novel, Richard Hannay goes on the run across the Scottish countryside after becoming mixed up in a plot to assassinate a Greek politician. I didn’t love this book – I thought it was entertaining at the beginning, but eventually became too repetitive as Hannay makes one last-minute escape after another. I do still want to read more of Buchan’s novels but I’m not sure whether I’ll continue with the others in the Hannay series or try something different.

The Thirty-Nine Steps was published in 1915. Another book I’ve read from that same year is The Good Soldier by Ford Madox Ford (5). Despite being published during the war and having the word soldier in the title, this is not actually a war novel, which I remember finding surprising! It’s the story of two couples, one British and one American, who meet at a German spa town in 1904. A clever, interesting novel with an intriguingly unreliable narrator, but not a book that I particularly enjoyed.

The name Ford leads me to my final book: Jamie Ford’s Hotel on the Corner of Bitter and Sweet (6). This novel is set in Seattle and follows the story of a Chinese-American boy whose Japanese-American friend, Keiko, is sent to an internment camp with her family during World War II. I found the story both heartbreaking and heartwarming, without becoming overly sentimental. Also, the words ‘bitter’ and ‘sweet’ are tastes, which provides a link back to The Naked Chef at the beginning of this month’s chain. Jamie Ford and Jamie Oliver both share a name as well!

And that’s my chain for this month! My links have included: celebrity chefs, unlikely detective duos, mysteries set at sea, numbers in titles, the year 1915 and the name Ford.

In December we’ll be starting with The Snow Child by Eowyn Ivey.

26 thoughts on “Six Degrees of Separation: From The Naked Chef to Hotel on the Corner of Bitter and Sweet”