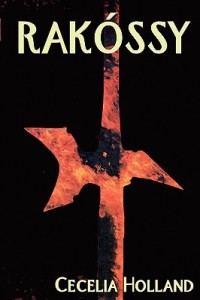 Cecelia Holland’s many historical novels cover a wide range of time periods and settings. So far I have only read two of them: City of God, a story of Rome and the Borgias, and Hammer for Princes, set in 12th century England in the period known as the Anarchy. My third Holland novel, Rákossy, takes place in Hungary during the Ottoman Wars of the 1520s. Not having read many books set in Hungary, I was looking forward to something different and to learning something new.

The title character is János Rákossy, a Magyar border lord trying to protect his lands from the threat of Turkish invasion. He is disappointed with the lack of help from the rest of Europe whom he feels are leaving Hungary to fend for itself and he knows he can’t rely on the support of his neighbouring barons either. All he can do is continue to negotiate treaties, train his knights, carry out raids, try to build alliances, and do whatever else is necessary to defend his castle and his people.

Rákossy is not the sort of man who is easy to like. He is ruthless, cold, cynical and violent towards both men and women. As another character says of him:

“The people in the village think that he sold his soul to the Devil for a charmed life and fortune in battle. The Turks, I’m told, believe so too. I think it’s possibly the only point of agreement between them.”

He does have some good qualities – he’s clever and shrewd and his courage is not in question – but he is certainly not someone I could consider to be a hero. This seems to be normal for a Cecelia Holland protagonist, though; I had similar feelings about Nicholas in City of God and Fulk in Hammer for Princes. She seems to excel at deliberately creating characters who are unappealing, morally ambiguous and whose motives are not always clear. But at least if her central characters are not very likeable, they are still interesting and complex.

Of the other characters in the novel, two stand out. One is Denis, Rákossy’s brother, a sensitive man who prefers books to warfare and doesn’t always approve of or agree with Rákossy’s actions. The other is Catharine de Buñez, believed to be an illegitimate daughter of the King of Aragon, who marries Rákossy early in the novel. As far as I can tell, most of the major characters in the book are fictional, although the story is based on fact, giving us an idea of the situation on the Hungary-Turkey border leading up to the Battle of Mohács in 1526. If you know what the outcome of that battle is going to be, it does affect how you might view Rákossy’s negotiations and military preparations throughout the novel, but either way you can admire what he is trying to do for his country.

I didn’t find this book particularly enjoyable, mainly because I thought it was very bleak and also because it didn’t seem to have any sort of plot beyond a string of raids and battles. It was one of Cecelia Holland’s earliest novels, though – published in 1967 – and based on the others I’ve read I think they do get better. I don’t think she’ll ever become a favourite author as her writing lacks the warmth and emotion I prefer, but I’m still looking forward to reading more of her books because her subjects and settings all sound so intriguing. I have a NetGalley copy of The Soul Thief, which is about to be reissued by Canelo, so I will be reading that one next. 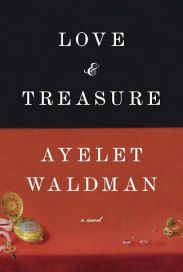 In Love and Treasure, Ayelet Waldman traces the fate of a single item – a necklace with a peacock pendant – and uses it to tell the story of Hungary’s Jewish communities before and after the Holocaust. Spanning a period of one hundred years, the novel is divided into three separate stories, but there are links between all three and the peacock pendant plays an important role in each one.

The novel begins in 2013 with a conversation between Jack Wiseman and his granddaughter, Natalie, when he admits to her that the necklace she wore on her wedding day thinking it was her grandmother’s did not actually belong to her grandmother at all. The real owner, he says, is unknown, but he would like Natalie to find her and give the pendant back.

We then move back in time to Salzburg in 1945 where Jack is serving in the US army. He is given the responsibility for guarding the Hungarian Gold Train, a train containing the confiscated personal belongings of thousands of Hungarian Jews (paintings, watches, furs, cameras and other objects) but while he does his best to protect its contents he is forced to watch as his fellow army officers ‘borrow’ one item after another. When Jack’s days in charge of the train come to an end, he himself steals one of its treasures – the peacock pendant – because it reminds him of Ilona, a Jewish girl from the Hungarian town of Nagyvárad whom he has grown close to during his time in Salzburg.

Returning to 2013, Natalie is beginning her search for the original owner of the pendant – a search which will take her to Budapest where she joins forces with Amitai Shasho, an Israeli art dealer on a special mission of his own. This takes us into the final section of the book, set in 1913 Budapest and telling the story of a psychoanalyst and one of his patients, a young Hungarian suffragette whose strong views lead to her father wanting her treated for insanity.

Of the three main sections of the novel I think my favourite was the first one, the story of Jack and Ilona. Ilona is a survivor of the concentration camps and through her character, Waldman explores the lives of the Displaced Persons who lost their homes and their families during the war. I thought she did an excellent job of showing what it may have felt like to be a Jew displaced in Europe after the war had ended. I cared about Jack and Ilona in a way that I never really came to care about Natalie and Amitai, so I was sorry to leave them behind when I reached the end of the first section and moved on to the second.

I also enjoyed the final part of the book: narrated by the psychoanalyst, Dr Zobel, this is the only section to be written in the first person rather than the third, and I thought his narrative voice was very strong and distinctive – just what I would expect from a man of his profession in 1913.

I found Love and Treasure a very interesting read because it introduced me to subjects I knew little or nothing about. The Hungarian Gold Train, for example, really existed, yet it’s something I had never read about before and I thought it was fascinating. While the book didn’t really affect me emotionally as much as I would have expected from a novel about the Holocaust, the fact that it was so intriguing from an historical perspective made up for it.

I read this book as part of the Love and Treasure Historical Fiction Virtual Book Tour. For more reviews, interviews and guest posts please see the tour schedule.

The Invisible Bridge begins in 1937 and follows the fortunes of three Hungarian Jewish brothers – Andras, Tibor and Matyas Levi – as they try to survive in a Europe torn apart by World War II. At the beginning of the book, Andras is preparing to leave Budapest and go to Paris to study architecture. Soon after his arrival in France, Andras meets Klara Morgenstern, a woman nine years older than himself, a ballet teacher with a teenage daughter. Andras and Klara fall in love, but Klara has secrets in her past – secrets that she would prefer not to share with Andras.

Andras and Klara’s story is played out against a backdrop of wartime Paris, Budapest, Ukraine and parts of the Hungarian countryside. The complex relationship between Andras and Klara is always at the heart of the novel but to dismiss this book as just another romance is unfair because it’s so much more than that.

Despite reading a lot of novels set during World War II, this is the first one I’ve read that is told from a Hungarian perspective. Hungary was allied with Germany which meant this story approached things from a slightly different angle than most other books I’ve read about the war and as I knew almost nothing about the role Hungary played, I was able to learn a lot from this book. And of course, because Andras and his family are Jews the novel is very much from a Jewish viewpoint. We see how it grew increasingly dangerous to be a Jew living in wartime Europe and how the Levi family became desperate to escape to safety. And when eventually Hungary finds itself under German occupation, we see that the Hungarian Jews fared no better than Jews elsewhere in Europe.

I enjoyed this book but it wasn’t perfect. There were times when I thought the balance between the romance storyline and the war aspect wasn’t quite right. And some of the characters needed more depth. I really liked Andras at first as he was a character who was easy to like and sympathise with, but as the story went on I started to find him a little bit too perfect and after spending more than 600 pages with him I wished he’d had a few flaws just to make him more interesting. I also think it would have been a nice touch if part of the book had been written from another character’s point of view. Not really a criticism of the book – I just think it would have added another dimension to the story and with the book being so epic in scope, the opportunity was there to do this.

The biggest problem I had with the book was the length! I’m usually quite happy to immerse myself in a long book but unlike some stories which do take a long time to tell, I thought this one could easily have been a lot shorter. My attention started to wander somewhere in the middle of the book when a lot of time was spent describing Andras’s life in the forced labour service (Jews were no longer allowed to serve in the actual Hungarian army but instead were expected to do jobs such as felling trees and clearing minefields) but things did pick up again over the last hundred pages.

In fact, the final section of the book, with its descriptions of life in Budapest towards the end of the war is so compelling and filled with so much tension, it made it worth sticking with the book through the less interesting chapters in the middle. And of course, I was genuinely worried for some of the characters so I had to keep reading to make sure they survived to the end of the book! I thought Orringer did a good job of keeping us in suspense wondering who would live or die and despite the few minor negative points I’ve mentioned above, I loved The Invisible Bridge.