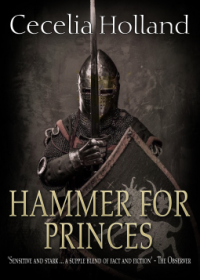 Cecelia Holland is an American author of historical fiction; her novels cover a wide range of time periods and settings as diverse as 12th century Iceland, the Mongol invasion of Eastern Europe, medieval France, and the search for Tutankhamun’s tomb. Earlier this year I read City of God, a story of Borgia-ruled Rome, and enjoyed it enough to want to try more of her work.

Hammer for Princes (which I have discovered was originally published in 1971 as The Earl) is set in England during the period known as The Anarchy. Since the death of King Henry I in 1135, the country has been divided between supporters of his nephew, King Stephen, and his daughter, the Empress Matilda. At the point when Hammer for Princes begins, Matilda’s son, Prince Henry, has taken up the battle for the throne and the country is still in a state of civil war. Fulk, Earl of Stafford, has pledged his loyalty to Henry and it is through Fulk’s eyes that the events of the novel unfold.

Fulk is an intelligent, shrewd man with a lot of experience when it comes to warfare and politics. But even as he leads his men in battle, storms castles and fights in tournaments, Fulk’s biggest problems come in the form of his own family. His scheming uncle Thierry has his eye on some of Fulk’s lands, which he believes are rightfully his, and to Fulk’s disappointment it seems that his own son, Rannulf, is ready to take Thierry’s side in the family feud.

This novel is written in the same detached, unadorned style I remember from City of God, which gives Cecelia Holland’s books a distinctive style all of their own. The characters are difficult to like and difficult to understand or connect with on an emotional level, but this just makes them all the more fascinating and complex. I’m not sure that I fully understood the purpose of everything Fulk said and did (I felt very much the same about the actions of Nicholas in City of God) but I do like books in which not everything is clearly explained for the reader and I don’t mind sometimes being left to interpret things for myself.

Hammer for Princes doesn’t have a lot of plot, being more of a series of episodes in Fulk’s life which, when added together, build up a vivid picture of the world of a medieval nobleman. The setting is a little unusual because Fulk is on the move all the time: on horseback, in camp, getting ready to ride into battle or journeying between castles. Holland does not write long, flowery descriptions but she does choose just the right words to set the scene and create atmosphere.

As I read Hammer for Princes I kept thinking of Wolf Hall; they are very different stories, of course, but the portrayal of Fulk reminded me very much of Hilary Mantel’s portrayal of Thomas Cromwell. Both novels are written in the third person, but delve deeply into the minds of their protagonists, both of whom are clever, subtle men with the sort of personal qualities that enable them to find their way through the shifting loyalties and political intrigues of their time.

I enjoyed following Fulk’s story and am looking forward to my next Cecelia Holland novel, whichever that may be.

Thanks to Endeavour Press for providing a review copy via NetGalley.

2 thoughts on “Hammer for Princes by Cecelia Holland”