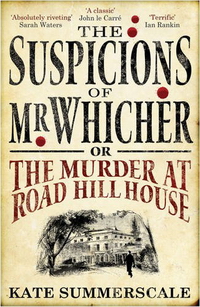 One night in June 1860 a little boy called Saville Kent was murdered at his home in the village of Road, Wiltshire. As it seemed certain that nobody had entered the house from outside, suspicion fell on the Kent family and their servants. When the local police proved to be incompetent, the Home Secretary requested that Scotland Yard send Detective Inspector Jonathan Whicher to assist them with the investigation. In The Suspicions of Mr. Whicher, Kate Summerscale tells the full story of the case and how it affected Whicher’s career.

This is a non-fiction book based on a true story. Considering the book combines two of my favourite things in literature – mysteries and the Victorians – you won’t be suprised to hear that I thought it was completely fascinating! And although I regretted not reading it sooner (it was first published in 2008), my timing actually couldn’t have been better. Just after finishing the book I discovered that it had been adapted for television, so the story was still fresh in my mind when I sat down to watch it on ITV1 last night (Monday 25th April). I enjoyed the TV adaptation but I’m glad I managed to read the book first.

I appreciated the fact that Summerscale was careful not to give away the solution to the mystery too early in the book, which meant the reader had a chance to study the clues and try to solve the mystery along with Whicher. It was interesting too to see how the vocabulary used in detective work has developed over the years, such as the origins of the word ‘clue’.

Summerscale also explains how during the 19th century people began to place a greater importance on the privacy and security of their homes than they had in the past. Thus a case like the Road Hill one was even more shocking in that it had taken place behind locked doors. The sanctity of the home had been violated and it seemed that the murderer was almost certainly one of the household. This must have made people all over the country afraid that the same thing could happen in their own family home. And with the multitude of new national and local newspapers that had appeared in recent years, detailed reports of this and other horrific crimes could be brought to an even wider audience. This, of course, allowed the public to become ‘armchair detectives’ and come up with their own theories as to what really happened.

The murder at Road Hill House captured the imagination of the British public and inspired a number of fictional detective stories such as The Moonstone by Wilkie Collins, which I read a few years ago. The character of Sergeant Cuff in The Moonstone is thought to be based on Whicher and I can also now see how Collins incorporated some other elements of the Road Hill investigation into his story – the importance which is placed on checking the family’s laundry, for example. I really need to re-read The Moonstone soon because I’m sure that knowing some of the background behind it will help me to get more out of it!

Have you read The Suspicions of Mr Whicher? Are there any other true crime stories that you’ve enjoyed reading?

16 thoughts on “The Suspicions of Mr. Whicher by Kate Summerscale”