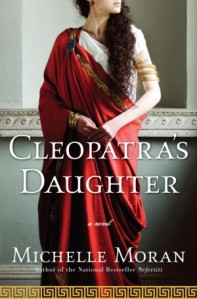 I was lucky enough to win a signed copy of this book in a giveaway last year. I feel bad about taking so long to read it, but it just never felt like the right time. When I eventually read it I was pleased to find that although I did have one or two problems with it, overall it was very enjoyable.

Kleopatra Selene is the daughter of the famous Queen of Egypt, Cleopatra, and her husband Marc Antony. When Antony’s army is defeated by Octavian at the Battle of Actium and Cleopatra commits suicide, ten year-old Selene and her brothers are left orphaned. Octavian takes them back to Rome with him where they join the household of his sister Octavia. On her arrival in Rome, Selene soon discovers that the city is in a state of unrest, with an unknown rebel known as the Red Eagle urging Rome’s huge slave population to rise against their masters. But Selene also has more personal things to worry about, such as going to school, falling in love and forming friendships – and through it all she hangs on to her dream that one day she will be able to return to Egypt.

I confess that I don’t know very much at all about Ancient Rome. It’s not one of my favourite periods of history to read about and although I know there are lots of historical fiction novels out there about the Romans, I’ve read very few of them. However, this was a good thing because it meant that a lot of the information in Cleopatra’s Daughter was new to me and I learned a lot of interesting facts. For example, I had never heard about the Columna Lactaria (Milk Column), a monument in Rome where mothers left their unwanted babies in the hope that someone would come and feed them.

One thing that strikes me about the Romans is the huge difference between the sophistication and advancement of their culture and the cruelty and barbarity of many of their customs. Michelle Moran does an excellent job of showing both the good side of Rome (the advanced technology, the architecture and the infrastructure of the city) and the bad side (there’s a scene where two hundred innocent slaves face being crucified because one of them has committed a crime, for example).

I did find it difficult to keep the relationships straight between the large cast of characters. This was partly because so many of them had similar names and also because most of the adults had been married at least two or three times each with several children from each marriage. Obviously this wasn’t the author’s fault though, and I did find the character list at the front of the book very useful! There are also some maps, a timeline, a glossary and an afterword explaining the eventual fate of each of the characters. All of these things were extremely helpful to someone like myself, with very little knowledge of Ancient Rome!

Although I did enjoy Cleopatra’s Daughter, it felt a bit too light for me. The characters didn’t have a lot of depth and the story didn’t affect me emotionally the way it was probably intended to. With the teenage narrator and lively writing style, I think this book would appeal to younger readers as well as adults.