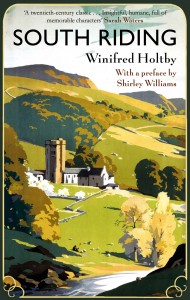 I read South Riding in February and managed to finish it just in time to watch the recent BBC adaptation. I’m glad I was able to read the book before watching the series as I like to be able to form my own images of the characters before seeing someone else’s interpretation of them. I also think if I hadn’t read the book first I would have found some parts of the adaptation quite confusing.

I first came across Winifred Holtby in Vera Brittain’s Testament of Youth (she and Brittain were close friends) but this is the first time I’ve read any of her work. South Riding, as well as being a wonderful story, is also a realistic and insightful portrait of a community, which reminded me of Middlemarch by George Eliot. It also shares some plot elements with Jane Eyre – one of the main characters even remarks on this herself!

So what is the book actually about? Well, it’s about Sarah Burton who is appointed headmistress of Kiplington High School for Girls and who begins to fall in love with troubled gentleman farmer Robert Carne. It’s also about Lydia Holly, the brightest girl in the school, who is forced to abandon her education and stay at home to look after her younger siblings after their mother dies in childbirth. And it’s about…no, I won’t tell you any more – South Riding is about so many different things I would rather leave you to discover them for yourself. But at the centre of all these storylines is the South Riding council, which makes the important decisions that affect the lives of every character in the book. And there are a lot of characters! When I first opened the book and saw the huge character list at the front, I was slightly overwhelmed: would I be able to keep track of who was who?

The answer is yes, because every one of them is well drawn and memorable. I really admired Sarah Burton. She was a woman who thought she could make a difference and she was prepared to take action to make things happen. But even some of the minor characters (such as Miss Sigglesthwaite, the nervous science teacher and Lily Sawdon, the innkeeper’s invalid wife) get their turn in the spotlight and I was very impressed that Holtby was able to give such a large number of very different characters so much depth. They all feel like real, believable people, people you might live or work with in real life.

Another aspect of the book I enjoyed was the portrayal of Yorkshire in the 1930s. Holtby paints vivid pictures and images, from the crowded streets and alleys of Kingsport to ‘The Shacks’, a cluster of huts and converted railway carriages where the poorest families live. The ‘South Riding’ doesn’t actually exist – the North, East and West Ridings are the three historic subdivisions of Yorkshire – but the setting feels completely realistic (Holtby apparently used the East Riding, where she grew up, as her inspiration).

I admit that South Riding hadn’t previously sounded very interesting to me and I hadn’t expected to love it as much as I did. It was a book I looked forward to returning to every day and I was sorry when I reached the final page.