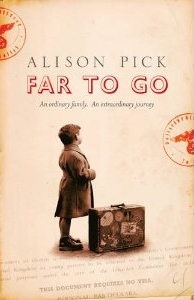 Far to Go is the moving story of a secular Jewish family, the Bauers, living in the former Czechoslovakia during the build up to the Second World War. Marta is nanny to the Bauers’ beloved little boy, Pepik, and at the beginning of the book, she is quite happy with her position – she gets along with both Pavel, a rich factory owner, and his wife, Anneliese (although Anneliese’s insensitivity annoys her at times) and she loves taking care of Pepik. But in 1938, when the Germans take control of the Sudetenland – the border region of Czechoslovakia where the family live – they find their peaceful existence is under threat. It doesn’t matter to the Nazis that the Bauers don’t consider themselves to be particularly religious – anyone with even a trace of Jewish ancestry is in serious danger. In an attempt to keep six-year-old Pepik safe the Bauers consider sending him to safety on the Kindertransport – but can they go through with it, knowing that they might never see their little boy again?

Far to Go is the first novel I’ve read that covers the lead up to World War II from the Czechoslovakian perspective, so a lot of the historical information was new to me. But instead of confusing the reader with a lot of names, dates and politics, Pick has chosen to concentrate on the lives of an ordinary Czechoslovakian family – a family who at first don’t realise how much danger they are in. Through Marta’s eyes we see how each member of the family tries to cope with the challenging times they are facing and the difficult decisions they are forced to make.

This is also the first time I’ve read about the Kindertransport (a scheme to help Jewish children escape from Czechoslovakia and other occupied countries by train, where they were then placed with foster families in Britain). I had tears in my eyes at the images of children being forcibly removed from their parents’ arms and pushed onto the trains, where they stood looking out of the windows as their families disappeared into the distance. Pick’s writing perfectly evoked the fear and confusion these poor children must have felt.

Although most of the book is written in the third person and focuses on Marta and the Bauers in the late 1930s, there are some sections which are set in the present day and from the viewpoint of an unnamed narrator who is carrying out research into the Holocaust and the survivors of the Kindertransport. At first I was slightly confused and wasn’t sure exactly who or what I was reading about, but eventually everything became clear and I could appreciate the clever structure of the book.

Far to Go is a beautiful, heartbreaking novel and one I would recommend to anyone interested in learning more about such an important period of Czech history.

I received a copy of this book from Headline for review.

9 thoughts on “Far to Go by Alison Pick”