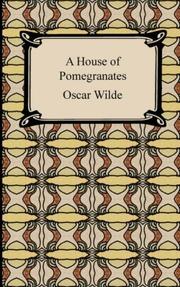 Last week I posted my thoughts on Laura Silver Bell by Sheridan Le Fanu for Irish Short Story Week. I then wanted to read another short work by an Irish author and remembered that A House of Pomegranates by Oscar Wilde was one of the free ebooks that came with my Sony Reader. Perfect!

A House of Pomegranates contains four short fairy tales by Wilde. I originally intended just to read one of them but ended up reading the whole book! Each story has a moral lesson for the reader but first and foremost they are enjoyable fairy tales – although quite dark in tone, as many fairy tales are.

Wilde apparently said that the stories in A House of Pomegranates are “meant partly for children, and partly for those who have kept the childlike faculties of wonder and joy, and who find in simplicity a subtle strangeness.” Having read the book I would agree with this assessment of it. Although I’m sure there are a lot of children who would enjoy the stories (I know I would probably have loved them if I’d read them when I was younger), I think they might be too long and too heavy on description for some, and in many ways will be appreciated more by adults.

In The Young King, we are warned against the love of beauty and luxury. On the eve of his coronation, the young king, who loves all the beautiful things in life, has three dreams in which he learns exactly where his magnificent new robe, sceptre and crown have come from – and suddenly, they don’t appear so beautiful after all.

The Birthday of the Infanta is a poignant story about the King of Spain’s daughter, who is celebrating her twelfth birthday. Among the entertainments that have been arranged for her is a performance by a dwarf, who later becomes convinced that the Infanta is in love with him. It quickly becomes obvious that the Infanta has a very sad and lonely life, but my sympathy was for the dwarf, who can be seen to represent anyone who is the victim of cruelty and prejudice. Even the flowers in the palace garden ridicule him.

The Flowers were quite indignant at his daring to intrude into their beautiful home, and when they saw him capering up and down the walks, and waving his arms above his head in such a ridiculous manner, they could not restrain their feelings any longer.

‘He is really far too ugly to be allowed to play in any place where we are,’ cried the Tulips.

‘He should drink poppy-juice, and go to sleep for a thousand years,’ said the great scarlet Lilies, and they grew quite hot and angry.

The Fisherman and his Soul is the longest of the four stories and to be honest, I didn’t think it needed to be quite so long. It felt very repetitive, which was a shame because it was otherwise an excellent story about a fisherman who falls in love with a mermaid and sacrifices his soul for her. It can almost be seen as a re-working of The Little Mermaid by Hans Christian Andersen, but instead of the mermaid longing to become human as in Andersen’s story, this is the reverse.

My favourite story in the book was The Star-Child, about a child who is found by a woodcutter after a shooting star falls from the sky. The child grows up to be selfish and conceited, but finally gets a chance to redeem himself.

A House of Pomegranates is certainly worth reading if you’re looking for something a bit different or if you like Oscar Wilde’s writing (although the wit and humour which shines through in his other works isn’t really present here). I would be interested in comparing this book with Wilde’s other, more popular, book of short stories, The Happy Prince & Other Tales, but I’ll have to wait until I’m in the mood for some more fairy tales!

Have you read either of Oscar Wilde’s two books of fairy tales?

10 thoughts on “A House of Pomegranates by Oscar Wilde”