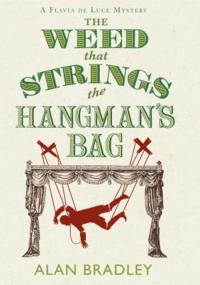 The Weed that Strings the Hangman’s Bag is the second book in Alan Bradley’s Flavia de Luce mystery series. I read and loved the first one, The Sweetness at the Bottom of the Pie, last year but it’s taken me so long to find time to read this one that the third book has also now been released and is waiting patiently on my shelf.

For those of you who are new to the series, the novels are set in the small English village of Bishop’s Lacey during the 1950s and feature Flavia de Luce, an eleven-year-old detective and chemistry genius. The mysteries are not particularly complex but Flavia’s unique narrative voice makes the books a lot of fun to read.

The Weed that Strings the Hangman’s Bag begins shortly after the previous book ended, but if you haven’t already read The Sweetness at the Bottom of the Pie I don’t think it would matter too much. And if you have read The Sweetness… you’ll find that this book is really very much the same: Flavia is still conducting experiments in her laboratory, her sister Daffy is still obsessed with books, her other sister Feely is still obsessed with her appearance, Father is still collecting stamps. But the tone of this book is slightly darker than its predecessor and I enjoyed the mystery more as there were a lot of possible suspects and the villain wasn’t immediately obvious – at least not to me!

This time Flavia investigates a murder that takes place during a puppet show in the village hall and begins to connect this death with the hanging of a little boy in Gibbet Wood several years earlier. As a detective, the advantage Flavia has is that being an eleven-year-old girl she can ask questions that the police can’t ask and can convince the local people to tell her things they might not tell an adult. Being an expert in poisons helps too, of course!

Flavia hasn’t changed a lot between the first book and this, but she does feel that little bit older and her sense of humour seems sharper. I’m hoping her character is going to develop further as the series goes on. The thing I love about Flavia is that she is somehow both a believable and an unbelievable character at the same time. She has a vocabulary like no eleven-year-old I’ve ever met and both her chemical and general knowledge are exceptional even by adult standards, but despite this she still feels real to me. She also has fears and insecurities (usually covered up by her tough exterior) and this book continues to explore her difficult relationships with her sisters and father, as well as introducing another family member, Aunt Felicity.

I love the old-fashioned, innocent feel of this series, which reminds me so much of the Enid Blyton books I grew up reading. Hopefully it won’t be too long before I can let you know what I think of A Red Herring Without Mustard!