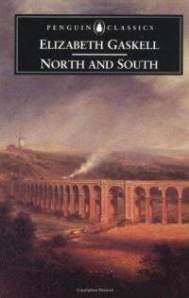 North and South is the story of Margaret Hale, a young woman who lives with her parents at their parsonage in the idyllic village of Helstone in the south of England. When Margaret’s father decides to resign as parson and takes a new job as a tutor in the northern manufacturing town of Milton, the Hale family initially find it difficult to adapt to their new environment. It is not until Margaret meets some of the inhabitants of Milton that the town begins to feel like home. She forms a close friendship with the Higgins family – the invalid Bessy, her younger sister Mary and their father, Nicholas, who works at the cotton mill. But when the Hales also get to know Mr Thornton, a wealthy mill owner, Margaret finds herself caught in a conflict between the poor mill workers and their rich masters.

There’s also a romantic element to the novel: Mr Thornton falls in love with Margaret who unfortunately is prejudiced against what she calls ‘shoppy people’. She seems to make up her mind to dislike him before she even gets to know him because he’s a tradesman who has earned his money rather than inheriting it and is not her idea of a real gentleman. And to make things worse, Mr Thornton’s mother thinks Margaret is haughty and wants to stop her son from becoming involved with her.

Although there were also a lot of things to like about Margaret, her attitude towards Mr Thornton prevented me from really warming to her until the second half of the book when after meeting different types of people and being exposed to important social issues she begins to reassess some of her views and starts to grow as a person. By the end of the book I didn’t find her the annoying character I did at the beginning. It was interesting to see how both Mr Thornton and Nicholas Higgins also changed due to Margaret’s influence. There’s a lot of character development in this book, which was one of the things I loved about it.

The book takes place during the industrial revolution, an important and interesting period of history. It was a time of progress, allowing the factory owners to develop great wealth and the country’s economy to grow. However, the factory employees were working under appalling conditions, with absolutely no regard for their health and safety. Bessy Higgins is one example of this: she is only nineteen years old and has already developed a lung disease which she blames on inhaling ‘fluff’ from the cotton in the mill where she used to work.

Most of this industry was concentrated in the north of the country, in towns and cities such as the fictional Milton. Gaskell herself was born in London but spent most of her childhood in Cheshire and then settled in Manchester after her marriage (the town of Milton is thought to be based on Manchester), so she would have had first-hand knowledge of the northern way of life and how it may have differed from life in the south. Even today many people still have certain views and misconceptions about the differences between northern and southern England and even more so at the time when Gaskell was writing this novel, so I did appreciate the way she showed both the positive and the negative things about both regions.

North and South hasn’t become one of my favourite classics, but I did still enjoy it, although I was slightly disappointed by the way the book ended – not because I was unhappy with the outcome but because it seemed too abrupt. After reading The Moorland Cottage in February, I’ve now read the required two books to complete the Gaskell Reading Challenge, but as I’ve enjoyed both of my choices I’m sure I’ll be reading more of Gaskell’s work in the future!

11 thoughts on “North and South by Elizabeth Gaskell”