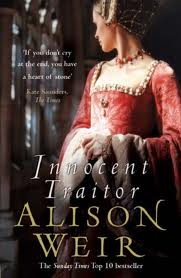 Alison Weir is best known for her non-fiction books but Innocent Traitor is her debut historical fiction novel from 2007 in which she tells the tragic story of Lady Jane Grey, the ‘Nine Day Queen’.

Jane was a great-niece of King Henry VIII. Her ambitious parents never bothered to hide their disappointment that she wasn’t the son they had hoped for – however, they immediately began plotting and scheming, first to marry Jane to Henry’s son, the young King Edward VI, and when this plan failed, to have the order of succession changed so that Jane would become heir to the throne in her own right. As Jane’s story unfolds, we are shown how terrible it must have been to be a girl born into the royal family in the 16th century and used as an innocent pawn in her parents’ selfish plans.

Much of the story is told from Jane’s point of view, but there are also sections narrated by her mother, Lady Frances Brandon, her nurse, Mrs Ellen, and several others, including Mary I, who is shown to have more compassion and humanity than she is usually given credit for – until, of course, she makes the final decision that will seal Jane’s fate. The use of multiple narrators to tell the various parts of the story worked very well. One minor criticism is that the early sections which are supposed to be narrated by a four-year-old Jane are not convincing at all, but I was able to overlook this. The book does focus more on the female perspective, but there are also one or two male narrators, the Duke of Northumberland (Jane’s father-in-law, John Dudley) being one of them.

I have no idea what Jane was supposed to be like in reality but Alison Weir has created a very engaging and sympathetic character. The sad thing is that under different circumstances Jane might actually have made a very good queen. She was intelligent and well-educated, courageous and dignified. Unfortunately when she came to the throne she was only fifteen, not old enough or strong enough to be able to deal with the unscrupulous, manipulative people around her. I found the portrayal of Jane’s husband, Guilford Dudley, interesting too. He’s shown as a cruel, unpleasant person who treats his wife badly, but like Jane he was also a pawn in his father’s ruthless plans and had no more control over his own destiny than Jane had over hers.

“If you don’t cry at the end you have a heart of stone” it says on the front cover of the book. Well, I’m pleased to report that I don’t have a heart of stone – the final pages of this novel are unbearably sad and yes, I did cry. I knew from the beginning how her story would end, but that didn’t make it any easier to read when it came. Despite already knowing what the outcome of the story would be, I couldn’t help wishing things would turn out differently for poor Jane. I’m not a big fan of the Tudor period as a subject for historical fiction, but I had never read a book about Lady Jane Grey before and am glad that I’ve now had the opportunity to learn more about this important but too often forgotten historical figure.