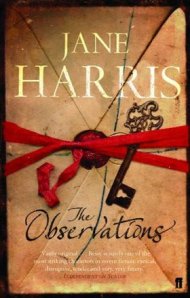 After I read (and loved) Gillespie and I, I knew I would have to find a copy of the first book by Jane Harris, The Observations, as soon as possible. Luckily my library had a copy so I didn’t have to wait too long to read it! I found this book just as entertaining and enjoyable as Gillespie and I, which puts Jane Harris firmly on my list of favourite authors.

The Observations is set in Scotland during the 19th century. Bessy Buckley, a young Irish girl, is on the run from her troubled past when she arrives at the estate of Castle Haivers near the village of Snatter. The lady of the house, Arabella Reid, offers her a job as maid and Bessy jumps at the chance. But Bessy is puzzled by the series of bizarre tasks which Arabella orders her to perform – and when she discovers that a previous maid, Nora, may have died under suspicious circumstances, it becomes obvious that things at Castle Haivers are not quite what they seem.

The Observations is a long book but was so gripping I read it in half the time it would normally take me to read a book of similar length. What makes this novel so different from all the others I’ve read set in the Victorian era is Bessy Buckley herself. Bessy is a fabulous character and narrator: funny and witty, poorly educated but bright and intelligent, tough and outspoken yet sensitive and warm hearted. When you first begin to read you might come across some unusual language and slang, not to mention some unconventional grammar and punctuation, but don’t worry about that – it’s all part of Bessy’s unique voice and her narration was a delight to read. The only thing that irritated me slightly was seeing numbers written as figures rather than words (1/2 instead of ‘half’, for example).

The relationship between Bessy and her mistress forms a big part of the story, but there are a few other interesting sub-plots, as well as the story of Bessy’s own childhood which emerges slowly throughout the book. There are shades of other Victorian novels, as well as some elements of the gothic novel and the ghost story, but the overall result is something completely original. The one criticism I have is that, after a very strong start, the story seems to lose momentum in the second half and the ending was slightly disappointing in comparison to the rest of the book.

Finally, I want to say how impressed I am that Jane Harris could take two such different narrators as Bessy Buckley and Harriet Baxter (from Gillespie and I), who are complete opposites in almost every way imaginable, and make them both so convincing! That’s a sign of a talented author in my opinion.

8 thoughts on “The Observations by Jane Harris”