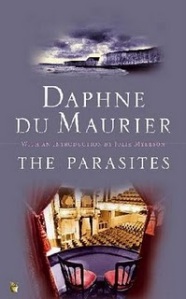 After reading the first few chapters of Daphne du Maurier’s The Parasites I had a feeling I wasn’t going to enjoy this book. I was finding the story very difficult to get into and I didn’t like any of the characters. But because Du Maurier is one of my favourite authors I decided I didn’t want to give up on the book just yet…and guess what? I ended up loving it! I should have known Daphne wouldn’t let me down.

The Parasites is a study into the lives of the Delaney family: Mama, a famous dancer, and Pappy, a successful singer, and their three children, Maria, Niall and Celia. The story begins one day in the 1940s when Niall and Celia, now adults, are spending the weekend at the home of Maria and her husband, Charles. It’s Charles, losing his temper with them, who refers to the three siblings as ‘parasites’…

“You always have been and you always will be. Nothing can change you. You are doubly, triply parasitic; first, because you’ve traded ever since childhood on that seed of talent you had the luck to inherit from your fantastic forebears; secondly, because you’ve none of you done a stroke of ordinary honest work in your lives, but batten upon us, the fool public who allow you to exist; and thirdly, because you prey upon each other, the three of you, living in a world of fantasy which you have created for yourselves and which bears no relation to anything in heaven or on earth.”

He then leaves the house in a rage, and Maria, Niall and Celia are left alone to wonder what his words meant and if it’s true that they really are ‘parasites’. Through a series of flashbacks and memories, the Delaneys spend the rest of the novel looking back at their childhoods and the things that turned them into the adults they are today.

One of the striking things about this book was the lack of one distinct narrator. Sometimes the three siblings seem to be narrating together, all speaking with one single voice, which was very unusual. It’s difficult to explain, but if you read the book you’ll see what I mean! As I read, I couldn’t help thinking that Maria, Niall and Celia must represent three different sides to Daphne du Maurier’s own personality; she writes so convincingly about all three characters and really gets inside their heads. And of course, her own father was the actor Gerald du Maurier and her mother the actress Muriel Beaumont, so she would have known what it was like to be the child of famous parents and could bring some of her personal experiences into this novel.

Maria, who becomes a famous actress, and Niall, who finds success as a songwriter, are stepbrother and stepsister and have a very strong bond. In her introduction to the book, Julie Myerson compares Maria and Niall with Cathy and Heathcliff from Wuthering Heights. I don’t think this would have occurred to me, but after it was pointed out I could definitely see the parallels.

Celia is half-sister to the other two, sharing a mother with Niall and a father with Maria. Although she also has a strong bond with them both, Celia often feels left behind. Despite her own talent for drawing and writing, she puts other people before herself and stays at home while her brother and sister go off to pursue their dreams. Of the three main characters in the book Celia was the only one who I liked and understood; some of the chapters where she takes a central role are very moving. I really disliked both Maria and Niall, who seemed to me to be very selfish characters who only ever thought about themselves. I found it difficult to feel any sympathy for either of them.

The Parasites may sound like a very serious novel, but there’s actually a good balance of drama and comedy. Some of the scenes are quite funny – in one of my favourite chapters, the Delaney family visit Charles and his parents at their country estate for the first time after Maria’s wedding and completely embarrass themselves! It was nice to see du Maurier’s sense of humour really shining through in this novel.

There are other du Maurier books that I’ve enjoyed more than this one, but after a slow start The Parasites turned out to be much better than I expected. It reminded me a lot of I’ll Never Be Young Again, one of her earlier novels, which was also very character-driven and personal. If you prefer her gothic, suspense-filled novels you may be disappointed, but if you want to try a different type of du Maurier book then hopefully you’ll enjoy this one as much as I did.

10 thoughts on “The Parasites by Daphne du Maurier”