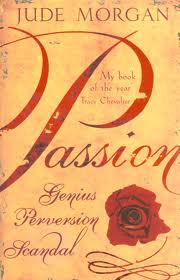 Passion is a historical fiction novel which tells the story of four women and their relationships with the Romantic poets, Byron, Shelley and Keats. There’s Lady Caroline Lamb, a married woman who has an affair with Lord Byron, and Augusta Leigh, his half-sister who also becomes his lover. Then there’s Mary Godwin, future wife of Percy Bysshe Shelley and author of Frankenstein, and finally, Fanny Brawne, John Keats’ fiancée. This long and ambitious book takes us through the lives of all of these characters, describing the passionate and unconventional relationships that scandalised the public during the early years of the 19th century.

Although the book concentrates on the four women I’ve already mentioned, there are several other women who also play an important part in the story. One of these is the writer and feminist Mary Wollstonecraft (Mary Shelley’s mother) and in the prologue we learn a lot about her life and death. We also meet Byron’s wife, Annabella Milbanke, and Claire Clairmont, Mary’s stepsister, who becomes involved with both Byron and Shelley. All of the female characters in the book are portrayed as interesting and complex people in their own right, not just because of the men they loved.

As well as providing information on the historical and political background of the late 18th and early 19th centuries, Morgan also shows exactly what it was like to be a woman living during those times. It was this attention to detail that made me really believe in the story. And he takes us right inside the minds of Mary, Caroline, Augusta and Fanny, imagining what they might have thought and how they might have felt. I thought the characterisation of Lady Caroline Lamb, with her excitable, emotional personality was particularly well done. I also enjoyed reading about Augusta Leigh’s relationship with her half-brother, Byron – the dialogue between them felt completely believable and the scenes where the two of them were together were some of my favourite parts of the book.

At over 600 pages long and with its variety of narrative styles and techniques this is not the easiest of books to read. The story is told from several different perspectives, there are shifts from past to present tense, and from the third person to first person, sometimes with the characters (particularly Caroline) talking directly to the reader. I had an idea of what to expect as I recently read one of Jude Morgan’s other books, The Taste of Sorrow, and although his writing style does take a while to get used to, I really like it.

Of the three poets, Byron comes across as the most charismatic and colourful character, which I expect was also true in real life, but Shelley was fascinating to read about too. He had such interesting ideas about vegetarianism, religion and marriage. Keats, however, doesn’t appear until near the end of the book and although he and Fanny Brawne do take more of a central role in the final chapters, the focus is definitely on the other characters. Keats’ and Fanny’s story felt disconnected from the others and this is the one thing that disappointed me about the book. I do understand though that Keats was slightly younger than Byron and Shelley and their paths didn’t really cross until later, so maybe it would have been difficult to incorporate him into the earlier parts of the book.

The last few chapters are very sad, with one tragedy and death following another. The scenes towards the end of the book which take place in Keats’ house at the bottom of the Spanish Steps in Rome were particularly poignant as I had visited the house a few years ago and so could picture his final days very vividly. (I would highly recommend visiting the Keats-Shelley House to anyone thinking of going to Rome, by the way.)

Although Morgan’s book about the Brontës, The Taste of Sorrow, had more personal appeal for me because I’m more interested in the Brontës than I am in the Romantic poets, I thought this book was equally impressive. Now that I’ve read it and know a lot more about Byron, Shelley and Keats, maybe I should have another attempt at actually reading their poetry!

11 thoughts on “Passion by Jude Morgan”