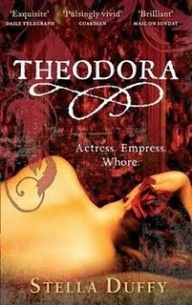 Theodora by Stella Duffy is a historical fiction novel based on the life of Empress Theodora of the Byzantine Empire. The book follows Theodora’s rise from her early days as an actress to her position as one of the most powerful women in the Empire.

Theodora’s story begins in 6th century Constantinople, the capital of the Byzantine Empire. When her father, a bear-keeper at the Hippodrome, is killed by one of his own bears, Theodora and her two sisters are sent to the teacher Menander who prepares them for a career in the theatre. Menander gives the girls and their friends instruction in dancing, singing, acting and acrobatics, but Theodora finds that her true talent is in making her audience laugh. A successful stage career follows but the darker side of this is that the girls are also forced into a life of prostitution from an early age.

When Theodora attracts the attention of Hecebolus, the newly appointed Governor of the Pentapolis (five cities in North Africa), he asks her to accompany him. She agrees to go to Africa with him but she knows that as a former actress she will not be allowed to marry and that Hecebolus will eventually lose interest in her. It’s not until she spends some time with a religious community in the desert that Theodora finally reaches a turning point and starts to think about what she really wants from her life.

Theodora is the first book I’ve read by this author and I thought it was a fascinating and inspirational story. This is not a period of history that I’ve ever been particularly interested in reading about and so I didn’t know anything about Theodora until now (I don’t mind admitting I had never even heard of her). This means I can’t comment on the historical accuracy of the book, but judging by the author’s note and bibliography at the back of the book Stella Duffy has obviously carried out a huge amount of research into both Theodora’s life and into the time period in general. I thought there were places where the amount of historical detail, particularly regarding religion and politics, slowed the story down too much, but most of it is very interesting and helps to paint a full and vivid picture of Theodora’s world.

As well as having an eventful and unusual life, Theodora also has a complex personality, which makes her a great subject for historical fiction. I didn’t find her very easy to like as a person, but I loved her as a character! She’s tough, outspoken and daring, but despite her hard exterior she does have a heart. She’s not perfect; she makes mistakes and says things that she shouldn’t, but this only makes her more human. One thing I really liked is that although Theodora does grow and develop as a person over the course of the novel, the changes that she goes through are completely believable and she doesn’t change so much that it’s unrealistic.

I was pleased to discover that there are plans for a sequel as I would love to meet Theodora again and find out what happens to her after her marriage to the Emperor Justinian.

I received a copy of this book from Virago for review.

7 thoughts on “Theodora by Stella Duffy”