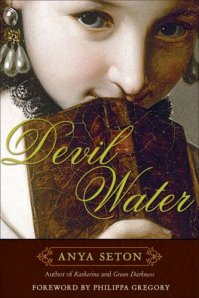 Several years ago I had the pleasure of discovering Anya Seton’s historical fiction novels. The first one I read was Katherine, the story of Katherine Swynford and John of Gaunt, quickly followed by Green Darkness, Avalon and The Winthrop Woman. After that I moved on to other authors and never got round to reading Seton’s other novels. And so I was pleased to come across one I hadn’t read, Devil Water, in the library. This book was originally published in 1962 and the story takes place during the Jacobite Rebellions of 1715 and 1745.

Devil’s Water is the name of the river that flows past Dilston, a village in Northumberland in the north east of England. In the early 18th century, when Anya Seton’s novel begins, Dilston is home to the Radcliffe family. James Radcliffe, the 3rd Earl of Derwentwater, and his younger brother, Charles, are descendants of King Charles II and were both real historical figures.

The first half of the book concentrates on the life of Charles Radcliffe and his secret marriage to a working-class Northumberland girl, Meg Snowdon, with whom he has a daughter, Jenny. Both Charles and his brother, the Earl, are Catholics and Jacobites (supporters of the Catholic James Stuart who is living in exile in France while his half-sister, the Protestant Queen Anne, reigns in his place). In 1715 the Radcliffes join the Jacobite Rising in an attempt to put James, who they consider their rightful king, on the throne. When the rebellion ends in defeat, Charles escapes to France and leaves Jenny to be raised in London by his friend, Lady Betty Lee. Throughout the second half of the book the focus is on Jenny’s adventures which take her across the Atlantic to the plantations of colonial Virginia in search of Rob Wilson, the man she loves.

This book was particularly interesting to me as I’m from the north east of England myself. There are very few novels set in this part of the country so it was nice to read about places that I’m familiar with. I appreciated the effort Seton made to reproduce various local dialects, depending on whether a character comes from Northumberland, London, Scotland, Ireland, Virginia or elsewhere. Although the northern dialects didn’t always seem quite right to me, it wasn’t a bad attempt and it gave the book a more authentic feel. And the characters never sounded too modern or used language that felt out of place either.

Although I knew absolutely nothing about the Radcliffes before reading Devil Water, you can always trust that an Anya Seton novel would have been well researched and as historically accurate as she could make it, while bearing in mind that it’s still fiction and not everything that happens in the book will be completely factual. This book includes two author’s notes at the beginning and end in which she details the research she carried out and explains which parts of the story are likely to be true. There are also some useful maps and family trees which I found myself referring to occasionally. Don’t worry though, because the book is easy enough to read and doesn’t feel like a history lesson at all.

So, I loved the settings and the time period (I’ve read historical fiction about the Jacobites before and it always makes me feel sad, knowing what the outcome will be) but I did have one or two problems with the book. I thought it was much longer than it needed to be and seemed to take forever to read; the pacing didn’t feel right either – some parts of the book dragged and there were some big jumps forward in time, often leaving gaps of ten years. But the main thing that prevented me from really loving this book was that some of the characters were very difficult to like. I never managed to feel any connection to Charles and was more interested in his brother, the Earl of Derwentwater. And another character, who I had just started to warm to, does something really unforgivable that completely changed my impression of them. I did like Jenny (and a few of the minor characters, such as Betty Lee) but because the people around her were so unlikeable, the story didn’t have the emotional impact on me that it might otherwise have done.

Have you read any other Anya Seton books that I haven’t read yet? Which ones would you recommend?