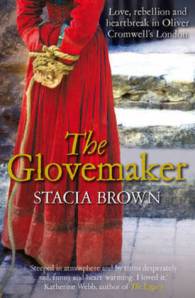 The Glovemaker is set in Oliver Cromwell’s England, just after the execution of Charles I in 1649, and follows the trial of Rachel Lockyer, a glovemaker’s assistant who has been accused of killing her illegitimate child. A new law states that any unmarried woman who is found to have concealed the death of her baby must be guilty of murder. Apart from Rachel herself, nobody knows the truth about what happened, but Rachel is reluctant to speak up and defend herself, so it’s left to investigator Thomas Bartwain to examine the evidence and the jury to decide whether Rachel should be sentenced to death.

The time period Stacia Brown has chosen for this novel is one that does not seem to be widely covered in historical fiction – the years between the English Civil War and the Restoration, when Oliver Cromwell ruled (known as the Interregnum) – and this is what had drawn me to the book. But when I read historical fiction I like to get a good sense of the period the book is set in and to feel as if I’ve been transported there myself and unfortunately, this did not happen with The Glovemaker. It didn’t help that I kept noticing inaccuracies – houses here in England don’t have stoops, for example, and I’m fairly sure we wouldn’t have been eating cranberry biscuits in 1649 either. Just small things, but they meant that I was never able to feel completely immersed in the atmosphere of 17th century London.

I did think the parts of the book set in Newgate Prison and describing the conditions under which the prisoners lived were quite compelling. And I learned a lot about the Levellers, the political movement that some of the characters in the book are part of. One of the Levellers in the novel is William Walwyn, the father of Rachel Lockyer’s child, who I discovered from the author’s note was a real historical figure.

I thought The Glovemaker was interesting in that it portrayed what must have been a very real situation for a lot of women at that time who found themselves pregnant but without a husband. It seemed very unfair that if the woman’s illegitimate child died at birth she would be assumed by law to have murdered it and unless she could produce a reliable witness, she would be sentenced to death – and even more unfair when you consider that this law did not apply to married women.

But other than as a study of the 17th century legal system, I wasn’t quite sure what the purpose of this story was supposed to be. There was no mystery, because we were told in the opening pages that Rachel had concealed her child’s death (we see her burying it behind the Smithfield slaughterhouse in the prologue) – the only question was whether or not the baby had died naturally. I didn’t think the romance aspect of the book worked either: the affair between Rachel and William Walwyn formed quite a big part of the story but I never felt emotionally involved in their relationship. The one character who did interest me was Thomas Bartwain, the investigator in charge of Rachel’s case, whose conscience starts to trouble him as he interviews witnesses and learns more about Rachel’s story and the injustice of the law.

I just wish I had been able to care about Rachel as this could have been such a moving story. Instead I was left feeling disappointed that, for me, this novel didn’t live up to its potential.

This book has also been published under the US title of Accidents of Providence.

8 thoughts on “The Glovemaker by Stacia Brown”